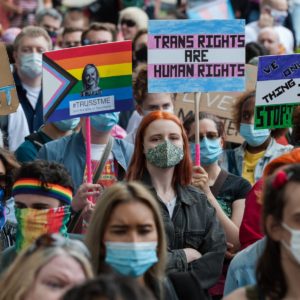 A press release from Colorado Senate Democrats this afternoon announces the passage of new legislation to ensure that gender identity is as protected from discrimination under state law as the spirit of Colorado’s progressive LGBT+ anti-discrimination laws has intended from the beginning:

Today, the Senate Judiciary Committee approved legislation sponsored by Senator Dominick Moreno that seeks to update existing law to ensure that Coloradans are protected against discrimination.

Current Colorado statute protects individuals from discrimination based on a variety of factors including: race, gender, age, and religion. HB21-1108 would update the law to include protections related to an individual’s “gender expression” and “gender identity.” The bill would also revise the current definition of “sexual orientation” to be more comprehensive and inclusive.

“As hate crimes continue to rise, we need to implement policies that safeguard our LGBTQIA+ community and protect them from discrimination,” said Senator Dominick Moreno, D-Commerce City. “With this bill, we are saying loud and clear that LGBTQIA+ folks are welcome in Colorado and deserve the same protections under the law as other marginalized groups. We have the ability to create a safer, more inclusive Colorado with the passage of this critical bill, moving us a step closer toward a more welcome society where everyone feels safe to be who they are.”

With respect to the growing problem of discrimination and violence against LGBT Coloradans, the unfortunate trend requiring ongoing vigilance is clear:

According to the FBI’s 2019 Hate Crime Report in Colorado, attacks against an individual’s sexual orientation have increased 49% from last year and now account for the second-largest number of bias-motivated attacks in the state. In addition, crimes targeting an individual’s gender identity have consistently risen since 2017 and increased 40% last year.

Since the passage of the Colorado Anti-Discrimination Act (CADA) 15 years ago, it has become apparent that an individual’s gender identity or gender expression can have a negative impact on their lived experiences in the same manner as other factors that are currently covered under the state’s anti-discrimination protections. This bill would ensure that gender identity and gender expression are included in the state’s anti-discrimination statute, paving the way for a more just and inclusive society for those in the LGBT+ community.

It’s another moment to note that while LGBT+ rights have been upheld and expanded in Colorado over the past fifteen years of mostly-solid Democratic political dominance, in many states the protections Coloradans take for granted are nonexistent–which is why the Equality Act being debated at the federal level to create federal protections in line with Colorado’s law is so important. Colorado’s progressive approach to this issue also makes Rep. Lauren Boebert’s virulent tirades against trans people from her platform in Congress even more objectionable. In quantifiable terms, Boebert doesn’t speak for Colorado.

That’s the reality we hope more people outside our state hear.