Get More Smarter on Friday (April 9)

Today is the 99th day of the year; 2021 starts to look really old tomorrow. Let’s Get More Smarter; if you think we missed something important, please include the link in the comments below (here’s a good example). If you are more of an audio learner, check out The Get More Smarter Podcast. And don’t forget to find us on Facebook and Twitter.

► As Bruce Finley reports for The Denver Post, Colorado officials are taking new steps to prepare for what they expect will be another bad wildfire season:

More aerial assets including a $24 million helicopter, prepositioning of air tankers that haul water and fire-snuffing slurry, and increased teamwork among local, state and federal agencies have placed Colorado in what officials described as an unprecedented state of readiness.

“Colorado used to talk about a fire season. It is now a year-round phenomenon,” Gov. Jared Polis said after a meeting of federal and state authorities, referring to the impacts of climate change…

…The core “wildfire season” in the state has increased by 78 days since the 1970s, officials said, with fires breaking out even in freezing temperatures. And human population expansion into burn zones — Polis pointed to some 300,000 houses built in woods requiring “perimeter defense” against wildfire — increasingly constrains what land managers can do.

► The Public Option is in the House!

TODAY is the day the Colorado Health Insurance Option bill will have it’s first committee hearing!

Every Coloradan deserves more than just one choice on the insurance market. This bill will change that and bring a new, quality, and affordable choice to our state. #coleg #HB1232 pic.twitter.com/bR715tummV

The public option bill had been delayed in attempt to find compromise with hospitals.

► As Colorado Public Radio reports, efforts to push an assault weapons ban in Colorado have stalled as key allies ponder a different approach:

Any major push to pass an assault-style weapon’s ban in Colorado is looking increasingly less likely, with the legislature’s highest-profile advocate for stricter gun laws saying now isn’t the time.

“It diverts all of the attention,” said Democratic Rep. Tom Sullivan of Centennial.

Instead, Sullivan wants to focus efforts on policies he believes would be more effective at preventing gun violence. Technology, he said, can circumvent bans on specific types of weapons…

…Democratic Gov. Jared Polis told CPR’s Colorado Matters that he is not focused on the type of firearm that was used in the massacre. Instead, Polis would like Colorado to strengthen universal background checks.

The Denver Post looks at how lawmakers plan to allocate funds from an unexpected budget surplus. As Marianne Goodland reports for the publication formerly known as the Colorado Statesman, the State Senate approved a proposed budget in a preliminary vote.

Alex Burness of The Denver Post reports on legislative efforts to deal with death threats toward lawmakers.

► The Associated Press reports on President Biden’s Thursday announcement on actions his administration is taking to promote gun safety:

President Joe Biden put on a modest White House ceremony Thursday to announce a half-dozen executive actions to combat what he called an “epidemic and an international embarrassment” of gun violence in America.

But he said much more is needed. And while Biden had proposed the most ambitious gun-control agenda of any modern presidential candidate, his moves underscored his limited power to act alone on guns with difficult politics impeding legislative action on Capitol Hill.

Biden’s new steps include a move to crack down on “ghost guns,” homemade firearms that lack serial numbers used to trace them and are often purchased without a background check. He’s also moving to tighten regulations on pistol-stabilizing braces like the one used in Boulder, Colorado, in a shooting last month that left 10 dead.

As CBS4 Denver reports, Colorado Rep. Joe Neguse (D-Boulderish) was with Biden at the White House for Thursday’s announcement.

► Kristi Burton Brown, the new Chair of the Colorado Republican Party and the architect of the (multiple) failed “personhood” initiatives in Colorado, has apparently finally figured out that talking about abortion is not how Republicans are going to win elections in this state.

► Workers at an Amazon warehouse in Alabama rejected an attempt to unionize.

► The Colorado Department of Public Health has cleared the way for public use of the Johnson & Johnson COVID-19 vaccine. CDPHE also announced that it is expanding in-home COVID testing for public facing employees.

► As Ernest Luning reports for the publication formerly known as the Colorado Statesman, Rep. Joe Neguse (D-Boulderish) is by one measure the most effective currernt Member of Congress.

► As The Washington Post reports, Democrats are unclear about what exactly West Virginia Sen. Joe Manchin actually means when he says he opposes weakening the filibuster.

► A Colorado doctor has been charged with stealing nearly $300,000 in COVID relief funds.

► POLITICO examines the current state of Congress and settles on one descriptive word: Mediocrity.

► According to an analysis by The Colorado Sun, political spending from gun safety groups is starting to outweigh spending by gun rights advocates.

► As POLITICO reports, former New Jersey Gov. Chris Christie is not involved in efforts to assist Republicans with winning back the Governor’s seat in 2022…and GOP frontrunner Jack Ciattarelli is totally cool with that.

That’s just fine with the Ciattarelli campaign, which has neither heard from Christie nor reached out to him. Ciattarelli’s people don’t view the former governor as an asset, especially since he left office as the most unpopular New Jersey executive since the advent of polling, with his approval rating reaching a nadir of 14 percent near the end of his second term.

► As David Brooks writes for The New York Times, the Biden economic agenda is massive and ambitious. And unifying.

► A Republican Member of Congress has publicly called on Florida Rep. Matt Gaetz to resign.

► If you believe in the multiverse theory of existence, then there is probably some universe in which this makes sense:

Facebook and Instagram are down right now, which ironically means we have more free speech in this country than usual.

► Back the Blue? As the Kansas Reflector reports:

► The Onion is not wrong: 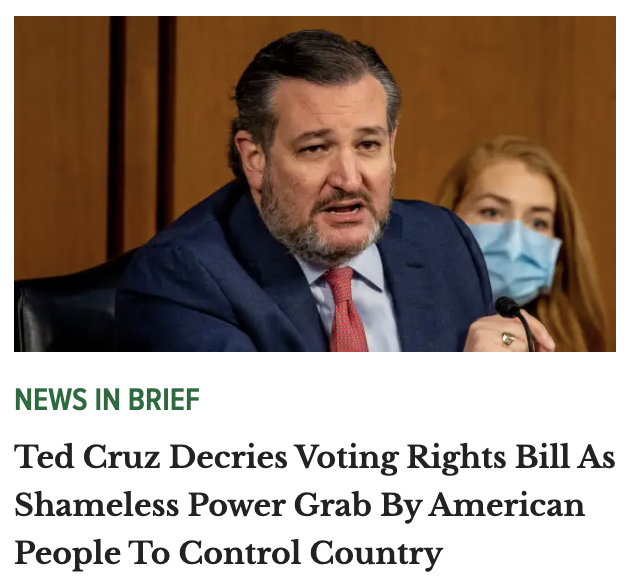 ► All of the far-right candidates seeking seats on the Grand Junction City Council were defeated on Tuesday, a sign that the influence of Trumpism and Lauren Boebert might already be waning in conservative circles. Newly-elected Republican Party Chair Kristi Burton Brown made an unsuccessful last-minute pitch on behalf of these candidates earlier this week.

► As Jennifer Rubin writes for The Washington Post, the Republican Party is shrinking. Literally:

► This week on The Get More Smarter Podcast, hosts Jason Bane and Ian Silverii talk All-Stars and A-Holes: