UPDATE: Somebody give Rep. Lauren Boebert a shovel, please:

Washington Post agrees with me that a man got into a fight and died less than a block from my restaurant. Then assigns three Pinocchios?

Compare this with Boebert’s detailed and unequivocal statements below. She really should stop talking now. 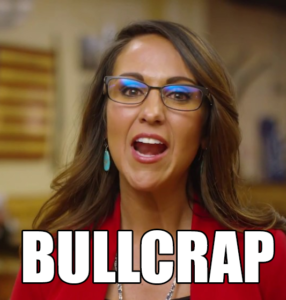 On Wednesday, Rep. Lauren “Q*Bert” Boebert spoke on the floor of the U.S. House in opposition to the Bipartisan Background Checks Act of 2021, legislation that would bring federal law into line with Colorado’s universal background check law on the books since 2013 and credited with preventing thousands of prohibited would-be-purchasers from buying guns. As Ray Erku of the Rifle Citizen-Telegram reports, Boebert referred Wesdnesday to an alleged violent incident outside the Shooters Grill she has long invoked as part of her origin story to explain why she and her restaurant staff carry guns:

Speaking on the House floor Wednesday during a debate over background checks, the staunch Second-Amendment advocate again used the 2013 incident to justify why she openly carries firearms.

“There was an altercation outside my restaurant where a man was physically beat to death, there were no weapons involved, he was beat to death by another man’s hands,” she said.

Years before her entry into politics, Boebert told the same story to FOX News in a puff piece about Shooters Grill:

“I started open-carrying maybe a month after we opened just because I am a woman in business and I was there early hours and late nights,” Boebert said. “There was a man beaten to death in the alley behind my restaurant last year. It was very unfortunate.”

It was lost in the din as Boebert barreled to victory last fall by saturating the news cycle with her now-trademark daily firehose of Trumpian rhetoric, but this story from Boebert about a supposed beating outside her restaurant that inspired her to carry a gun was investigated and debunked last year in a report by the Colorado Sun’s Nancy Lofholm:

“There was a violent altercation in our back alley where a man was physically beaten to death and it immediately prompted the question, ‘How will I defend my people?’ So, I began to carry that day,” Boebert told the Durango Herald last year.

The Rifle Police Department has no record of such a murder. [Pols emphasis] A man did die on the sidewalk down the street from Shooters in the early morning of Aug. 22, 2013. Initially, it was investigated as a possible homicide, but an autopsy determined the man died from a drug overdose.

Although Boebert was able to get away with telling this fictional story on the campaign trail in CD-3, repeating it on the floor of the U.S. House as an elected member of Congress naturally means it’s going to be subject to more questioning. And that’s exactly what has happened since Wednesday–the Washington Post’s Glenn Kessler with a blistering multi-Pinocchio fact check:

We often find that politicians’ origin stories get untethered from reality the more they are repeated.

Boebert tells the story of a man who was beaten to death outside her restaurant. Police considered it a possible homicide but quickly concluded that the man died of a drug overdose. There was a fight, but it took place blocks away from her restaurant; the man merely ran past the back of her business before collapsing.

The UK Independent, which has taken an interest in reporting on Boebert that we hope doesn’t hurt tourism from across the pond:

Lauren Boebert argued against gun background checks with a story about a man being beaten to death behind her restaurant – but who actually died from a drug overdose.

The Colorado lawmaker made the debunked claim on the floor of the House and has told the same story repeatedly on the campaign trail and in interviews.

We obtained official Rifle Police Department reports, and an autopsy and toxicology report. Based on those documents, we are issuing a rating of “Mostly False” as to Boebert’s claims. A man did die after being found close to her restaurant, on Aug. 22, 2013, and he had been involved in a physical altercation earlier that night. However, he was not “beaten to death,” but rather died of a drug overdose. Furthermore, the location where he was found was not “outside” of Shooters Grill, or even in an adjacent alleyway.

The police department told the newspaper that a man had indeed died down the street from the gun-themed Shooters Grill restaurant in August, but that an autopsy indicated that he had died after overdosing on drugs.

Yahoo News reported that this was not the first time that Boebert had made this claim, as she told the same story multiple times when running for office.

After being shelled by media outlets confirming and reconfirming that this long-retold story was not true, Rep. Boebert’s newest communications flack made the mistake of trying to defend Boebert with the Washington Post. He probably should have saved his breath:

Update: Ben Stout, Boebert’s communications director, contacted The Fact Checker after this article appeared and argued that her statement was accurate because Green’s body was discovered about a half block from her restaurant. He could not explain why she claims Green was beaten to death outside the restaurant, except to cite a local newspaper report shortly after Green’s death (nearly eight years ago) that had said the cause of death was unknown.

That conversation had to have felt a little like Sean Spicer and the biggest inaugural audience ever.

All of this is of course very bad for Rep. Boebert’s credibility, completely wrecking a major point in her bio she has relied upon for years to build her public image–and the only saving grace we can think of for Boebert is that her loyal social media following is well past the point of getting hung up on small matters like credibility.

For the rest of us, it’s more proof of a troubling pattern that has emerged in a remarkably short time.

Under scrutiny, everything about Lauren Boebert collapses into fraudulence.