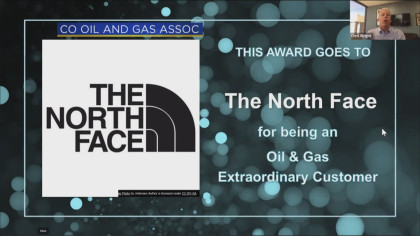 Colorado Republican Party press secretary CBS4 Denver political reporter Shaun Boyd is all over the latest stunt from the always-punchy (see: benzene exposure) Colorado Oil and Gas Association, responding to a decision last December by Colorado-based outdoor clothing manufacturer The North Face to reject an order of logoed jackets for Texas oilfield services company Innovex Downhole Solutions as not in keeping with the company’s policies for mutual branding:

The North Face is being celebrated by the very industry it snubbed. The Colorado-based company recently rejected an order for 400 jackets from a Texas oil and gas company because it reportedly didn’t want to be associated with an industry that doesn’t meet its brand standards.

Ironically, the jackets and almost every product The North Face produces and sells is made with nylon, polyester and polyurethane, all of which come from petroleum.

So, the Colorado Oil and Gas Association decided to have some fun with the situation. It bestowed its first-ever “Extraordinary Customer Award” on The North Face, saying it appreciates the company for its abundant use of oil and gas.

The problem, if you haven’t already guessed it, is there’s a rather large difference between producing durable goods like jackets from petrochemicals and burning them for fuel! If we were only using petroleum to produce plastics, lubricants, and other stuff that doesn’t get burned, those products would be cheaper–probably not North Face jackets though, since they’re a premium brand–but more importantly the petrochemical industry would not be a principal contributor to global climate change. Unless the plan is to start burning North Face jackets as fuel, this comeback from COGA makes no sense.

If we were in charge of The North Face’s PR, which we aren’t, that’s where we would start.

The North Face did not respond to CBS4’s request for comment. In a statement to the Financial Times, the company said it investigates product requests to make sure they align closely with the goals surrounding sustainability and environmental protection.

Or you could just ignore Shaun Boyd and COGA completely like The North Face did! That’s fine too.