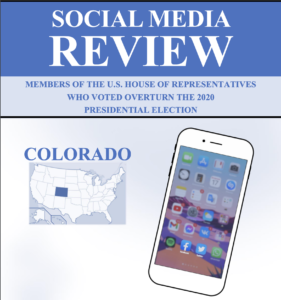 The “Lofgren Report” is getting a lot of attention today, with Colorado Reps. Lauren “Q*Bert” Boebert (R-ifle) and Doug Lamborn (R-Colorado Springs) both popping up in a collection of social media posts related to the terrorist attack on the U.S. Capitol on January 6 and related efforts to overturn the results of the 2020 Presidential election.

Democratic Rep. Zoe Lofgren has quietly posted a nearly 2,000-page report documenting social media posts by her Republican colleagues who voted against certifying results of the presidential election on January 6. The information compiled isn’t secret, but the report is another sign of the deep distrust that has settled into the US Capitol in the weeks since the insurrection.

The report chronicles the social media activity of members on public forums immediately before the November election and right after the January 6 riot. The report has been online for a week.

CNN reported earlier Thursday that federal investigators are examining records of communications between members of Congress and the pro-Trump mob that attacked the Capitol, as the investigation moves closer to exploring whether lawmakers wittingly or unwittingly helped the insurrectionists.

In a preamble to the report, Lofgren — the chair of the House Administration Committee — wrote that she had asked her staff to pull the relevant social media posts and compile them in an effort to gather facts.

The “Lofgren Report” is divided up into different sections organized by state. Colorado’s list includes 74 pages of questionable social media posts from Boebert and Lamborn, but mostly from Boebert (Q*Bert accounts for 73 pages all by herself). For example: