Get More Smarter on Wednesday (March 3)

Happy “World Hearing Day.” Please celebrate respon…we said “Happy World Hearing Day!” If you think we missed something important, please include the link in the comments below (here’s a good example). If you are more of an audio learner, check out The Get More Smarter Podcast. And don’t forget to find us on Facebook and Twitter.

► As National Public Radio reports, President Biden expects the United States to have enough COVID-19 vaccines for every adult by May:

“We’re now on track to have enough vaccine supply for every adult in America by the end of May,” Biden said, crediting his administration’s efforts to boost production and moving up the timeline from the end of July, which is what the president was saying just a few weeks ago.

As announced earlier in the day, Biden said his administration is invoking the Defense Production Act to boost production of the Johnson & Johnson vaccine, which received emergency use authorization from the Food and Drug Administration over the weekend.

Colorado’s supply of COVID-19 vaccines is expected to rise significantly over the next month. As The Denver Post reports:

Governor Jared Polis is confident that Colorado will look “close to normal” by this summer.

► The Denver Post previews one of the bigger bills that will be discussed this session: A public option health insurance proposal. As Saja Hindi writes:

Only one state in the U.S. — Washington — has a public option health insurance plan. Democrats think they could make Colorado the second. They’re reviving the issue in the Colorado Legislature for another year of debate on a bill that, this time, makes some concessions to the health care industry.

A draft of the legislation circulated Tuesday. Bill sponsor Rep. Dylan Roberts, an Avon Democrat, said there isn’t a specific timeline for when it’ll be officially introduced, but said he expects “robust conversations over the coming weeks and changes to be made prior to introduction.”

In 2019, lawmakers directed the state to recommend a public health insurance plan. Last year, lawmakers tried to pass the plan, but had to shelve it because of COVID-19. Roberts has said this year’s bill takes the effects of the pandemic into account by giving the industry time to recover from COVID and reduce costs on its own.

The healthcare industry is sufficiently nervous that it might have to worry more about patients than profits that it has started a $1 million advertising campaign.

Here are some more stories about the state legislature:

Legislation to protect public health workers from “doxxing” is moving along quickly.

9News reports on a bill that would require landlords to give tenants more notice before evictions.

► Colorado Public Radio reports on a voting rights and election reform bill in Congress that has Colorado’s Congressional delegation divided along partisan lines:

The For the People Act has pride of place for Democrats in the U.S. House, clearly denoted by it’s bill number: H.R. 1.

It is a voting rights, campaign finance, ethics rules and election reform package that aims to increase voter access to the polls and decrease the influence of big money. The bill would strike down hurdles to voting and curb partisan gerrymandering by requiring states to use non-partisan commissions to redraw lines, like Colorado is doing.

Colorado Republican Reps. Lauren “Q*Bert” Boebert, Ken Buck, and Doug Lamborn are all opposed to the legislation because they understand that increased voter participation will hurt Republican chances in future elections.

As if to prove this point, Republican lawyers arguing in front of The Supreme Court on Tuesday said the quiet part out loud:

This literally just happened at the Supreme Court ⬇️

Justice Barrett: What is the interest of the GOP in keeping (laws that suppress minority voters) on the books?

Republican Lawyer: It puts us at a competitive disadvantage relative to Democrats. Politics is a zero-sum game.

► The single greatest threat to a free society is NOT a decision to stop printing a couple of Dr. Seuss books that nobody even knew existed before this week. Sorry, Ken Buck.

Oh, and it’s worth noting that Buck asked his followers to “retweet” and “like” his post if they agreed that “Cancel culture under the guise of racism may be far more dangerous than anything else we face as a free society.” That one backfired in spectacular fashion.

► Congresswoman Lauren “Q*Bert” Boebert(R-ifle) used a proxy to cast votes in the House of Representatives on Friday because she was en route to the CPAC conference in Orlando, Florida. Boebert claimed she couldn’t cast votes in person because of “the ongoing public health emergency.”

► If you’re having trouble keeping track of whether or not Rep. Ken Buck (R-Greeley) believes that there was widespread election fraud in 2020, you are absolutely not alone.

► If, for some reason, you were thinking of traveling to Texas anytime soon…don’t.

As coronavirus case across the country are dropping, cases in Texas actually increased by 5% over the last two weeks, according to statistics from Johns Hopkins University. Which makes this a very odd time for Texas Republican Gov. Greg Abbott to do what he did on Tuesday.

“Too many Texans have been sidelined from employment opportunities,” Abbott said. “Too many small business owners have struggled to pay their bills. This must end. It is now time to open Texas 100%.”

What Abbott meant by 100% is this: He is dropping the state’s mask mandate and allowing all businesses to open at 100% capacity beginning March 10. He justified those moves by noting that 5.7 million Covid-19 vaccine shots have been given in the state and that Texans have “mastered the daily habits to avoid getting Covid.”

The editorial board of The Washington Post piles on:

The governor’s decision may cheer those feeling rebellious, fatigued and impatient with the year-long pandemic restrictions. But the result of opening too soon will be viral spread, and more suffering. Only 12.9 percent of the Texas population has received one or more doses of vaccine. They and others previously sickened may enjoy some immunity, but a huge swath of the state’s population remains vulnerable. The winter holidays and the third surge were awful. A fourth surge — which could spread beyond Texas — is the last thing the country needs just as vaccines are being rolled out. Mr. Abbott is throwing a match on kindling.

We’ll also remind you not to visit Mississippi, but that’s probably unnecessary.

The Minnesota Department of Transportation announced its winners in a “name that plow” contest, with “Plowy McPlowFace” taking top honors. Colorado is holding a similar contest to name CDOT snowplows, which Gov. Jared Polis will announce today.

► It’s not entirely clear as to whether Sen. John Hickenlooper (D-Denver) supports an effort for a $15 per hour minimum wage.

► Another person you’ve never heard of before has filed to run for Congress in CO-3.

► Westword updates its list of Coloradans who are facing charges stemming from the January 6 terrorist attack on the U.S. Capitol.

► The New York Times reports on efforts to restrict voting rights in Georgia that will adversely impact people of color.

► Four of the largest school districts in Colorado have now announced plans to return to in-person learning.

► Maine Republican Sen. Susan Collins says she will vote to approve Deb Haaland for Secretary of the Interior.

Biden bribed Democrats with $2,000 checks just so he could get into power to bomb Syria and pass a bill so Hunter could sneak into women’s locker rooms.

Y’all should’ve asked for your money up front! 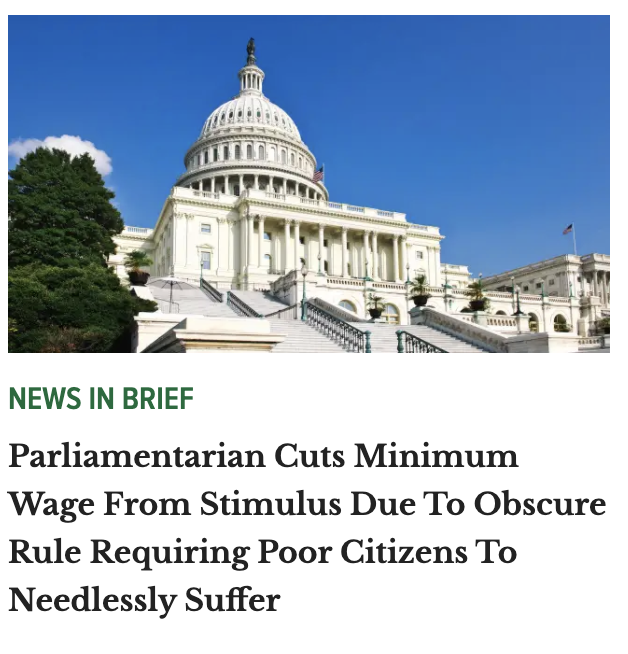 Things the GOP cares about:

Things the GOP doesn’t care about:

► Vox.com examines the future of the QAnon movement.

► Get More Smarter about redistricting and reapportionment.