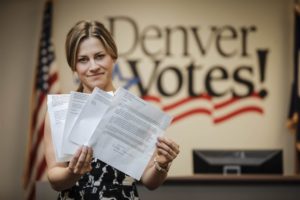 Amber McReynolds, the former Director of Elections for Denver and the CEO of the National Vote at Home Institute, is apparently set to receive an interesting nomination from President Biden. As The Washington Post reports:

President Biden will nominate a former U.S. Postal Service executive, a leading voting rights advocate and a former postal union leader to the mail service’s governing board, according to three people briefed on the nominees, a move that will reshape the agency’s leadership and increase pressure on the embattled postmaster general…

…If confirmed, the nominees would give Democrats a majority on the nine-member board of governors, with potentially enough votes to oust DeJoy, who testified Wednesday before a House panel that his new strategic plan for the mail service included slowing deliveries.

Postmaster General Louis DeJoy was being grilled today by the House Oversight and Reform Committee about his plans for dealing with delivery problems and economic issues facing the U.S. Postal Service.

As Paul Waldman writes in a separate column for The Washington Post:

To refresh your memory, DeJoy, a Republican mega-donor with no experience in the USPS, was appointed to lead the agency in the spring of 2020, despite having been beset by allegations of abusive practices at his business, conflicts of interest and potential campaign finance law violations. This came after President Trump had spent years attacking the Postal Service.

DeJoy quickly took steps, supposedly in the service of cost-cutting, that had the effect of slowing down mail delivery. You probably noticed it.

While the president does not directly appoint the postmaster general, DeJoy was selected by a Republican-dominated Board of Governors, and his selection was understood as being in tune with Trump’s venom for the USPS — a complicated story in itself that may have its roots in Trump’s burning jealousy of Jeff Bezos, the founder of Amazon, which uses the USPS extensively to send packages.

Biden can not directly fire DeJoy, but a new Board of Governors could certainly make a change at the top of the USPS. McReynolds is a registered “Unaffiliated” voter but would likely work with a new Democratic majority on the Board of Governors to find a replacement for DeJoy.