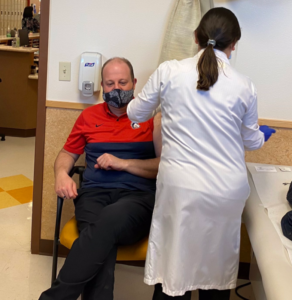 Five days ago, the RMPBS reported on Gov. Jared Polis and First Gentleman Marlon Reis receiving their first doses of coronavirus vaccine at the Salud Clinic in Commerce City:

As thousands of Colorado senior citizens reported to Coors Field Saturday, January 30 to receive their COVID-19 vaccines, Governor Jared Polis and First Gentleman Marlon Reis arrived at Salud Clinic in Commerce City to get their first doses of the vaccine.

“I’m putting my arm where my mouth is,” the governor told a group of patients at Salud Clinic…

Polis and Reis’ vaccination comes roughly two months after the couple tested positive for COVID-19 on November 28, 2020. Polis never faced more than mild symptoms, however Reis was hospitalized for two days after experiencing a worsening cough and shortness of breath.

Polis, 45, said he received the vaccine because he is among about 200 people who were given priority access to ensure continuity of government. Others in his age group likely won’t receive the vaccine until this summer unless they have two or more comorbidities. 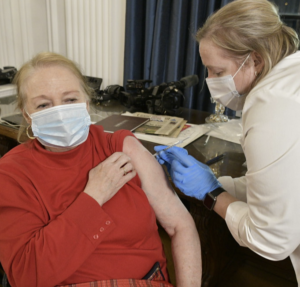 Although the decisions about who gets priority for vaccination while the demand outstrips the supply in these first few critical months of availability are under a great deal of understandable scrutiny, it’s easy to understand why Gov. Polis and his spouse needed to get vaccinated ASAP–along with members of the legislature, and other top elected officials. Although the work of elected officials is routinely devalued by the right, so much so that political institutions are considered less popular in many cases than communicable diseases, Gov. Polis is currently presiding over a state of emergency affecting six million people. It’s critically important work, and if it were a Republican in office we believe there would be absolutely no quarrel on this point.

Polis’ duties as governor obligate him to be in contact with the public every day, and lawmakers in the General Assembly likewise can’t be expected to convene in a public space to do the people’s business without every available protection. And of course the First Gentleman gets the shot too, because married couples can’t be expected to socially distance from one another.

For everyone who doesn’t believe government’s best use is to be drowned in the bathtub, we’d say this is a no-brainer. But here in Colorado, it seems, there’s another aspect to this that Gov. Polis’ Republican critics are zeroing in on: the fact that Colorado has a male governor…and also a First Gentleman.

Gov. Polis claimed his husband received the COVID vaccine early by virtue of his position as First Gentleman.

Polis then refused to say whether the vaccine was made available to other spouses in state government. #coleg #copolitics #cogov pic.twitter.com/gVpVLn0Bey

@GovofCO just announced that his unelected husband received the vaccine before at-risk groups, because he–his husband–is “an essential member of the executive branch.”

What is going on under the gold dome. #copolitics @9NEWS

Got that, folks? “He–his husband.” There’s really no way to not get what Brauchler is emphasizing, and it’s as distasteful as it is obvious.

The spouses of governors in other states, even in states where politicos getting vaccinated has become a controversy, don’t seem to be getting singled out for this extra degree of criticism after getting vaccinated along with their husbands. We didn’t hear this hue and cry in late December when First Lady-elect Jill Biden got her vaccination alongside the incoming President either, or when former Second Lady Karen Pence received hers.

Is there room for reasonable debate, and even tough questions, about the rollout of COVID-19 vaccines in Colorado? Of course. There is an argument for, as some other governors have chosen, foregoing the vaccine even if justified for continuity of government in order to prioritize health workers and the most vulnerable getting it first. This isn’t about hiding from legitimate policy or political questions that may exist.

But once Republicans turn it into another tawdry display of homophobia, we’re done listening.