Boebert Town Hall Scheduled, Cancelled Before You Even Knew

Boebert, R-Colorado, had apparently been scheduled for an event here, word of which began circulating online Friday evening. But by Saturday, the event had been canceled and the host site, Circle 3 Cowboy Fellowship, reported receiving a phone threat before the cancelation.

“The congresswoman was planning on stopping by a small private event,” Ben Stout, communications director for U.S. Congresswoman Lauren Boebert, said in a provided statement.

“This was not an official town hall organized by her office. It became clear that there was not adequate security for the number of people that were planning to attend the event. The congresswoman looks forward to meeting with members of the community in the future.”

UPDATE: Shannon Watts of Everytown for Gun Safety makes a couple of irrefutable points, and thanks for the link:

Put aside the fact that this town hall cancellation destroys Lauren Boebert’s arguments that 1) she doesn’t have security so she must be armed, 2) being armed will always protect you, why isn’t she holding this now online – unless it’s to avoid questions? https://t.co/JMMOpWnZPS

Late yesterday, the Montrose Mirror posted this announcement from Rep. Lauren Boebert of a town hall meeting set for today with basically no notice: 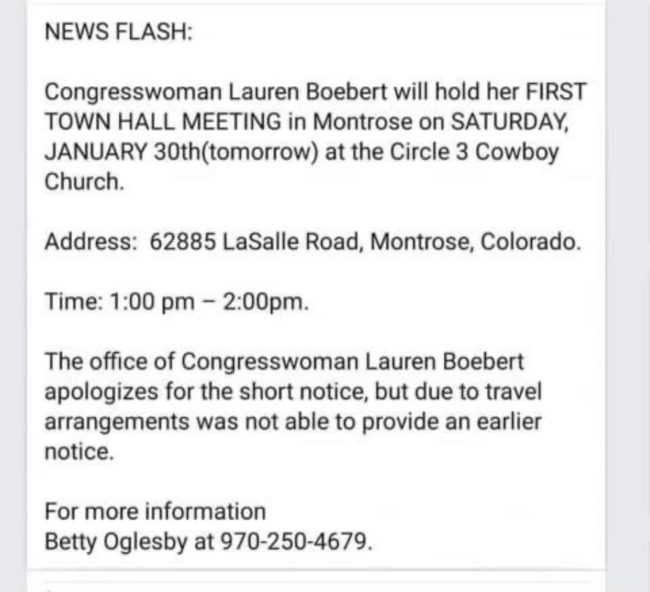 But this morning, the word is that Boebert’s first-ever town hall as a sworn-in member of Congress, which would have been a big news event after Boebert’s historically chaotic first few weeks in office, has been cancelled due to an unspecified security threat:

Now you know as much as we do, folks, but we’ll update as more information becomes available. We certainly do not condone threats against any elected official, and in this moment perhaps it’s even okay to take a measure of comfort in Boebert’s robust security.