UPDATE #2: We are duty bound to report that the once-weeklong suspension of Rep. Lauren Boebert’s Twitter account has been lifted:

They do this to thousands of conservatives every single day.

When the press reported the ban, it was lifted.

What about the thousands of Americans who have been banned and are never heard from again?

Un-sound the all clear, folks.

Rep. Lauren Boebert says Twitter has locked her account for nearly a week until the end of Inauguration Day…

Boebert has been in the hot seat online after defending President Donald Trump’s claims of election fraud and also saying he did not incite any of the violence seen when pro-Trump supporters stormed the Capitol.

Critics have also accused her for inciting the violent mob on Jan. 6 through her Twitter posts.

Thousands of people online and across Colorado have asked for the newly elected congresswoman to resign. But she fired back on Monday saying Democrats and “Hollywood elites” are hypocrites and also to blame for escalating political division. 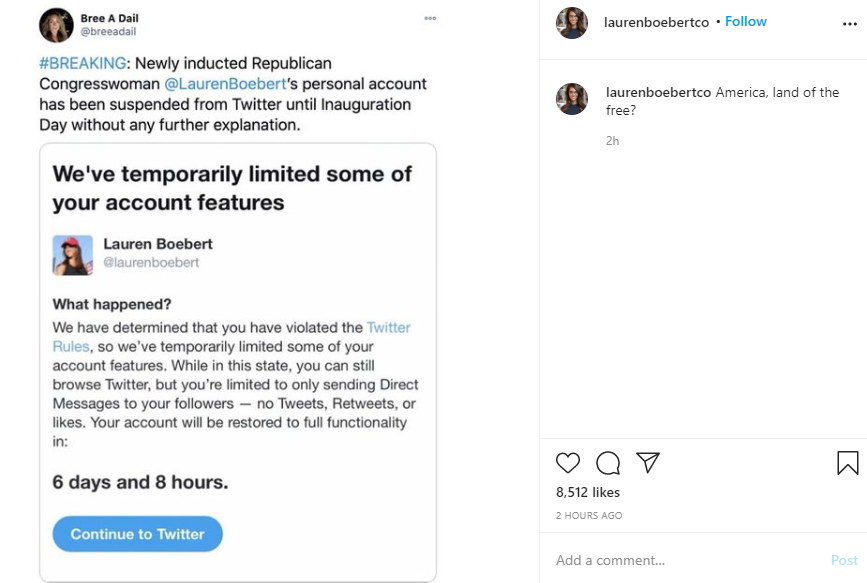 As it turns out, live-Tweeting security details during an insurrection violates the Twitter Rules!

We’re comfortable with that. Watch this space for updates.