Get More Smarter on Monday (January 11)

President Trump will be out of the White House in less than 9 days. If you think we missed something important, please include the link in the comments below (here’s a good example). If you are more of an audio learner, check out The Get More Smarter Podcast. And don’t forget to find us on Facebook and Twitter.

► Congresswoman Lauren “Q*Bert” Boebert has officially been in office for a little more than a week, and she is already facing significant pressure to resign or be expelled from Congress because of her open support of rejecting results of the Presidental election and inciting attacks on the U.S. Capitol. As Westword explains:

Only a few days into her term as U.S. Representative for Colorado’s 3rd Congressional District, Lauren Boebert is already being inundated with calls for her to resign the position or risk being expelled by her new colleagues for allegedly helping to incite the violence that took place in Washington, D.C. on January 6. And these efforts are getting national attention, with CNN putting a report about the controversial firebrand in heavy rotation over this past weekend. 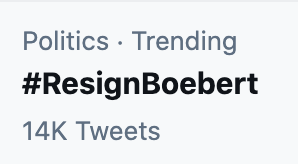 Boebert is being identified as a key voice responsible for inciting last week’s attack on Congress — and fellow Republican Rep. Ken Buck (R-Greeley) has even acknowledged her role in stirring up Trump terrorists. Here’s more from Wyoming Public Media:

Their messaging – and the president’s – is what got us here, said Thomas Zeitzoff, a scholar of political violence and political psychology at American University.

By buoying Trump’s false claims of election fraud, they essentially told their supporters: “Here are the enemies who did it and here are the actions that should be taken,” he said.

Zeitzoff said they created this narrative anchored by a shared set of grievances and Wednesday was the culmination of that.

A story from Raw Story over the weekend pointing to Boebert’s social media posts on Wednesday is picking up a lot of traction, as is the previously mentioned story from CNN (video). Celebrities such as Debra Messing, Patricia Arquette, and Patton Oswalt are amplifying the concerns about Boebert. A petition calling for the resignation of Boebert and fellow election results-denier Rep. Doug Lamborn (R-Colorado Springs) is apparently getting a lot of traction.

How is Boebert reacting to these claims? Well, she isn’t even trying to pretend that she had nothing to do with last week’s attack. This is pretty much the only thing she’s said even addressing the issue. Perhaps she’s taking the advice of fellow Rep. Eric Swalwell and shutting the hell up. She may also want to familiarize herself with the 14th Amendment.

► As POLITICO reports, the House of Representatives has enough votes to impeach President Trump for inciting last week’s violence in Washington D.C.:

Key members of the House Judiciary Committee introduced a single article of impeachment Monday that has already gathered at least 218 cosponsors, according to a congressional aide involved in the process, meeting the majority needed in the House. Pelosi signaled Sunday night that the House would vote on that article if Trump refuses to resign and Vice President Mike Pence won’t initiate other procedures to remove him…

…At a brief House session on Monday morning, the House formally accepted the resignation of Sergeant-at-Arms Paul Irving, who was partly responsible for security arrangements on Jan. 6. And moments later, Rep. Alex Mooney (R-W.Va.) blocked unanimous consideration of a resolution from Rep. Jamie Raskin (D-Md.) that would have urged Pence to invoke the 25th Amendment process to remove Trump from power. The House intends to vote on the resolution Tuesday.

Because Republicans blocked a resolution to encourage invoking the 25th Amendment, the House will almost certainly vote on impeachment on Wednesday. A Senate trial on impeachment would not conclude before Trump’s last day in office, on Jan. 20, but the process will still continue.

As 9News explains, Rep. Ken Buck is trying to convince Democrats NOT to impeach Trump because it could be “divisive” for the country. Hopefully you didn’t just pull a muscle rolling your eyes.

A majority of voters, 56 percent, say they hold President Trump responsible for the storming of the U.S. Capitol, while 42 percent say they do not hold him responsible.

A slight majority, 52 – 45 percent, say President Trump should be removed from office. Voters also say 53 – 43 percent that he should resign as president.

► As The Washington Post reports, there is more concerning news about how last week’s attack on the U.S. Capitol made it past security measures:

Two days before Congress was set to formalize President-elect Joe Biden’s victory, Capitol Police Chief Steven Sund was growing increasingly worried about the size of the pro-Trump crowds expected to stream into Washington in protest.

To be on the safe side, Sund asked House and Senate security officials for permission to request that the D.C. National Guard be placed on standby in case he needed quick backup.

But, Sund said Sunday, they turned him down.

In his first interview since pro-Trump rioters stormed the U.S. Capitol last week, Sund, who has since resigned his post, said his supervisors were reluctant to take formal steps to put the Guard on call even as police intelligence suggested that the crowd President Trump had invited to Washington to protest his defeat probably would be much larger than earlier demonstrations.

On Sunday, Rep. Jason Crow (D-Aurora) shared details of a conversation he had with the Secretary of the Army regarding last week’s attack on the U.S. Capitol.

► Congressman Jason Crow (D-Aurora) is getting a lot of well-deserved attention for his heroic actions last week during the attack on the U.S. Capitol:

Colorado learned this week what happens when you send a Patriot to Congress. A @nexton9news commentary: pic.twitter.com/7Na8WfdP5P

► Republicans who have continued to support the idea that the 2020 Presidential election was somehow fraudulent are getting blowback from big donors. As The Washington Post reports:

Republican lawmakers who tried to overturn President-elect Joe Biden’s victory even after that effort unleashed a violent mob on the Capitol now face a reckoning from their corporate benefactors.

A growing number of companies announced over the weekend they are suspending campaign contributions to those eight Republican senators and 139 House Republicans.
The list so far includes Blue Cross Blue Shield, Commerce Bank and Marriott International. And four of the country’s biggest banks — JPMorgan Chase, Citigroup, Goldman Sachs, and Morgan Stanley — are suspending all political giving.

► Members of Congress who were sheltering in place during last week’s attack on the U.S. Capitol are now dealing with a COVID-19 problem, thanks to obstinacy from their Republican colleagues. From The Washington Post:

Rep. Bonnie Watson Coleman, a 75-year-old cancer survivor, has tested positive for the coronavirus after taking shelter in a room with lawmakers who refused to wear masks during last week’s violent takeover of the Capitol by a pro-Trump mob.

► President-elect Joe Biden has selected William Burns, a well-respected career diplomat, to serve as Director of the Central Intelligence Agency.

► As Jesse Paul reports for The Colorado Sun, Democratic lawmakers will pursue new gun safety measures in the next Colorado legislative session:

Democratic state lawmakers in Colorado are planning to introduce at least three pieces of gun-control legislation this year, including a measure that would require a waiting period — potentially of five days — between when someone purchases a firearm and when they can access that weapon.

The other two bills would require gun owners to safely store their weapons and to report to authorities if one of their firearms is lost or stolen.

“This isn’t going to end the crisis of gun violence in our society,” said state Rep. Tom Sullivan, a Centennial Democrat whose son, Alex, was murdered in the 2012 Aurora theater shooting. “But it will help to curtail it.”

While other gun-control policies run by Colorado Democrats in the past decade have been focused on mass shootings, the bills this year mainly are aimed at reducing accidental shootings and suicides, the legislative sponsors say. Sullivan says he will champion the bills enacting a mandatory waiting period and requiring that people report lost or stolen firearms.

► The Colorado Attorney General has opened a grand jury investigation into the death of Elijah McClain.

► You can count Colorado Attorney General Phil Weiser among those who view Congresswoman Lauren Boebert as an “embarrassment.”

► The Denver Post profiles Rep. Alec Garnett (D-Denver), the new Speaker of the House in Colorado.

► As 9News reports, local school districts have learned a lot from the last year as they prepare to re-open in-person learning.

► You probably don’t want to be near the State Capitol next week:

► Vox.com looks at how the COVID-19 death toll in the United States compares to other wealthy countries.

► Michigan has banned the open carry of firearms inside its State Capitol building.

► Good stuff from The Onion on last week’s violence.