Get More Smarter on Wednesday (November 18)

Happy Proclamation Day of the Republic of Latvia. Please celebrate responsibly. If you think we missed something important, please include the link in the comments below (here’s a good example). If you are more of an audio learner, check out The Get More Smarter Podcast. And don’t forget to find us on Facebook and Twitter.

► And then there was purple. As The Denver Post reports:

Colorado will impose tighter restrictions on 15 counties, including Denver and much of the metro area, by the end of the week in the state’s latest effort to curb the accelerating transmission of COVID-19 without ordering a lockdown, officials announced Tuesday.

The new public health restrictions in those counties encourage, but do not order, people to stay at home, while prohibiting all personal gatherings outside of an individual’s household, barring indoor dining at restaurants and moving last call for alcohol to 8 p.m.

Confusion about the new rules reigned for much of the afternoon Tuesday after Gov. Jared Polis announced at a news conference that “a number of counties” would be moving to Level Red on the state’s revamped, color-coded coronavirus dial — but then declined to identify which counties would be subjected to the more aggressive restrictions.

Level Red used to be the highest level on Colorado’s dial and would have triggered a stay-at-home order, but state officials have pushed back the threshold that counties need to qualify for a lockdown by adding an even higher status — Level Purple — that Polis said won’t be invoked unless hospitals are overflowing.

TL;DR: Most of the Metro area will likely be moved to Level Red at the end of the week, which is not as bad as Defcon Purple but is still a significant increase. 9News has more on what the Purple means.

Stay home if you can. Wear a mask if you can’t. And never forget: The coronavirus doesn’t care about your political leanings. As The Washington Post reports, more than 3 million Americans are now believed to be contagious with coronavirus. 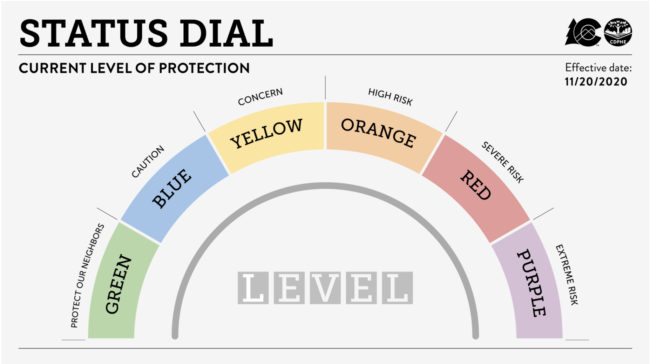 Elsewhere, the FDA has authorized the first at-home coronavirus test — and it won’t require you to jab yourself in the brain with a long q-tip.

► How bad are things going at the White House? As Chris Cillizza writes for CNN, the Lame Duck-in-Chief is doing just about everything we feared he would do:

The end of Donald Trump’s time in the White House was always going to be ugly. Just how ugly is now coming into clearer focus.

The removal of Chris Krebs, the director of the Department of Homeland Security’s Cybersecurity and Infrastructure Security Agency, on Tuesday night is the newest abomination of how a government and a president should work. While it’s impossible to say it’s the worst or most damaging thing Trump has done while in office — they all run together after a while — what can be said is that what the President did on Tuesday night runs directly counter to the healthy functioning of a democracy.

Why? Because Krebs was fired for telling the truth…

…If you are fine with Trump firing Krebs, what you are saying is that the truth is immaterial. That the whims of a leader trump facts. Down this road — and it’s not even that slippery of a slope — lies nothing good. And in fact, a lot of very scary things.

Krebs did his job by helping to keep our elections safe in 2020, but his failure to find fraud doomed him with a President who is desperate for someone credible to acknowledge that there is still a way that Trump could remain in office.

► Colorado Sen. Cory Gardner will not be in the Senate much longer after getting pummeled at the polls earlier this month. You would think this would give Gardner some freedom to express actual opinions about important topics, but, alas, cowardice has kept a firm grip on the Yuma Republican.

► As we mentioned Tuesday, Congressman Ken Buck (R-Greeley) will soon drop his second job as Chairman of the Colorado Republican Party. According to Conrad Swanson of The Denver Post, former Secretary of State Scott Gessler and the genius behind “Personhood,” Kristi Burton Brown are both potential candidates to succeed Buck as Chair. Ultimately, we’d expect that it will be Gessler who ends up as the next GOP Chair.

► Colorado Public Radio has more on the coming special legislative session in Colorado to discuss some sort of state-level stimulus help.

► As The Washington Post reports, President Trump’s nominee for the Federal Reserve Board is probably sunk…thanks to Republicans:

Senators voted narrowly on Tuesday to send Judy Shelton’s nomination to the Federal Reserve Board of Governors the way of the gold standard.

Two Republican defectors and three absent Republicans sank her nod, which failed on a 50-to-47 vote. Senate Majority Leader Mitch McConnell (R-Ky.) switched to oppose Shelton to preserve the right to revive the matter. But to change the outcome, he would need to find two more votes for her, and that will be a tall order…

…Shelton has earned skepticism from Republican senators and conservative thinkers for a long history of fringe views, including advocating a return to the gold standard, questioning the need for the central bank and criticizing its independence. And she has drawn criticism for changing her mind on key matters in an apparent attempt to curry favor with President Trump.

Yeah, we know; we had you at “advocating a return to the gold standard.”

► It appears that some Republicans in Congress are waiting for President Trump to come to terms with losing his re-election bid before they congratulate President-elect Joe Biden. Exactly WHY they think Trump will ever come to terms with his loss is another question entirely.

► The New York Times tries to understand what in the hell South Carolina Republican Sen. Lindsey Graham thinks he is doing:

Graham seems determined to reverse the election’s outcome on the president’s behalf. On Friday, he phoned Brad Raffensperger, the secretary of state of Georgia and a fellow Republican, wondering about the possibility of a slight tinkering with the state’s elections outcome.

What if, Mr. Graham suggested on the call, according to Mr. Raffensperger, he had the power to toss out all of the mail-in votes from counties with high rates of questionable signatures on ballots?…

…Legal experts said it was doubtful that Mr. Graham’s actions, which were open to interpretation, could lead to criminal charges or that they represented a violation of Senate ethics. Still, it appeared that Mr. Graham had stepped over an ethical line.

If an ethical line even existed in Graham’s mind, he crossed that invisible barrier a LONG time ago.

► As The Washington Post explains, Republicans agreed to certify election results in a key Michigan county after initially — and inexplicably — refusing to do so:

The unexpected twist came after the four-member Wayne County Board of Canvassers had deadlocked on the day of the deadline for Michigan counties to certify the vote — a move President Trump celebrated on Twitter as “a beautiful thing.”

The Trump campaign has alleged irregularities in the vote count in the county seat of Detroit, accusations city officials have vigorously denied. Democrats accused GOP officials of seeking to disenfranchise voters in the majority-Black city of Detroit…

…After the initial deadlock in Wayne County was met with an outpouring of condemnation, the board recessed Tuesday night and returned with a new agreement to certify the results, along with a request that the secretary of state’s office conduct a comprehensive audit of the vote tallies.

► As POLITICO reports, Florida Democrats are kinda losing their shit after a tough 2020 election.

► Vox.com tries to understand the American obsession with conspiracy theories.

► Congressman Ed Perlmutter (D-Jefferson County) has tested positive for COVID-19 but is thus far asymptomatic. On Tuesday, Perlmutter’s office released this official statement on the news:

“I learned today that I have tested positive for COVID-19. As of now, I am asymptomatic and I’m feeling good. I am currently in Washington D.C. and plan to isolate in my apartment while continuing to work and voting remotely.

“I’ve been taking precautions like so many Coloradans over the past eight months. This serves as an important reminder that this virus is highly contagious and should be taken seriously. As we enter the holiday season, I encourage everyone to continue to heed the warnings of no personal gatherings, social distancing, and wearing a mask.”

► Millions of Americans are in need of new coronavirus stimulus assistance, but Senate Majority Leader Mitch McConnell is hell-bent on playing Scrooge this Christmas.

► Slate.com has more on a concerning recount in a North Carolina race for a State Supreme Court seat.

► California Gov. Gavin Newsom done messed up on his response to the coronavirus.

► The FBI is apparently investigating Texas Attorney General Ken Paxton for using his office to benefit a wealthy political donor.

► You know you are spewing some serious nonsense when even Fox News taking muppet Tucker Carlson won’t carry your water.

► Remember former Massachusetts Senator Scott Brown? He’s in the news — and not for a good reason.