Colorado Republicans are asking their supporters for donations to investigate election fraud, but apparently only in those races they lost or are still too close to call.

Two days after the election the state party used the still as-yet undecided race for District Attorney in the 18th Judicial District as a hook for donations, warning of “reports of potential fraud taking place across America.”

Arapahoe Clerk Joan Lopez, whose country is within the 18th Judicial District, offered details on the ballot count process and made clear there has been no evidence of fraud locally.

“Arapahoe County is currently focused on the work of the voter ballot cure process, said Lopez. We’re awaiting remaining military and overseas ballots to ensure all votes are counted. In every election, we employ bipartisan teams of election judges at every step of the process, and we welcome watchers from both political parties to observe ballot processing. We have no evidence of fraud affecting the 2020 election.”

On Monday the state party again asked for money, touting Congresswoman-elect Lauren Boebert’s claims that President Trump has not lost the election.

“[Boebert] refuses to let the Democrats and media get away with their election corruption and is calling on We The People to “hold the line.”
Please make a contribution to our Election Integrity Fund to follow Lauren Boebert’s lead and ensure that the President is elected legitimately.”

I hope all the liberals keep the whole unity mantra up no matter who actually ends up winning this election.

Boebert is fully embracing the fraud narrative herself, claiming in numerous tweets that the election isn’t yet over and that Trump will be re-elected.

Hey “journalists”, when you say that there’s no evidence of voter fraud you are lying.

There are sworn affidavits.

That is evidence. Basic fact of law.

Why do we have to do your job for you?

Also on the Western Slope, the Mesa County Republicans used its latest fundraising email to take perhaps the most extreme position of any county Republican party in the state. Titled, “We Are Not Conceding the 2020 Presidential Election,” the request for money to “expose the rampant fraud that has already been proven to exist in many Democrat-run states and/or counties.”

“We choose to fight, and not concede! The 2020 election is not over; it has just begun. Please consider donating generously to the Trump campaign by using the donate button at the top of the page as the campaign works to ensure the legitimacy and accuracy of this election, and identify and expose the rampant fraud that has already been proven to exist in many Democrat-run states and/or counties.”

Mesa County Clerk Tina Peters did not immediately return a message requesting comment. This article will be updated with an response received

In the Republican stronghold of Weld County, GOP Chair Will Sander celebrated his party’s local wins while lamenting the statewide losses of Sen. Cory Gardner and President Trump and accusing Democrats of “corruption.” His email also included an appeal for funds to “support our President.” 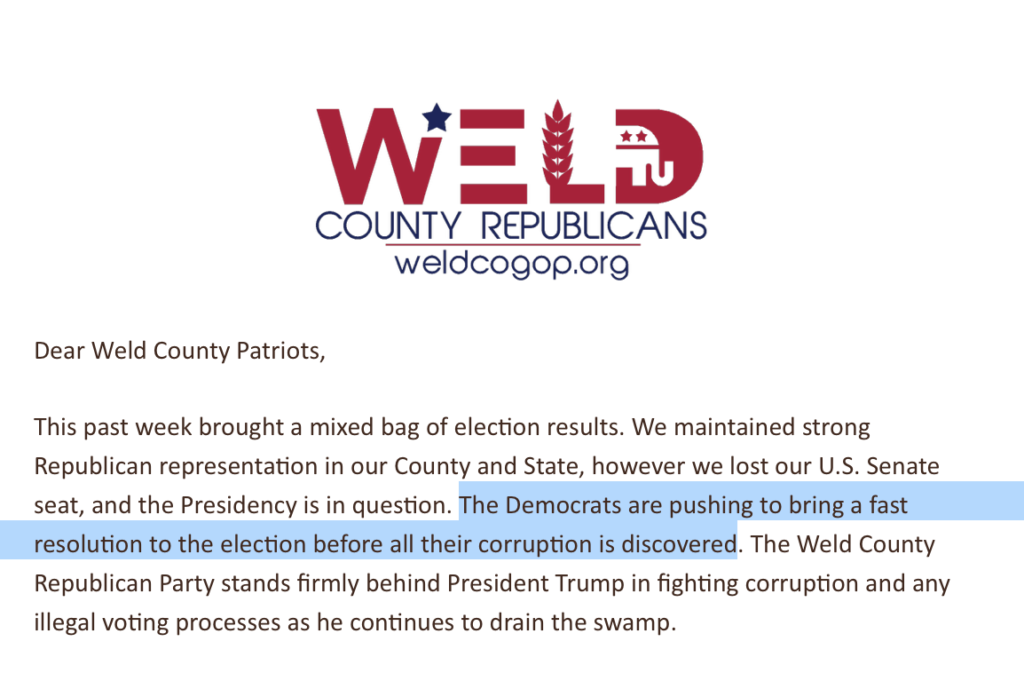 “This past week brought a mixed bag of election results. We maintained strong Republican representation in our County and State, however we lost our U.S. Senate seat, and the Presidency is in question. The Democrats are pushing to bring a fast resolution to the election before all their corruption is discovered. The Weld County Republican Party stands firmly behind President Trump in fighting corruption and any illegal voting processes as he continues to drain the swamp.”

“I have had lots of conversations with leaders from both parties here in Weld, said Koppes. “They know & trust that my team and I handled everything properly and fairly and that it ran as smoothly as any previous election in the county.”

“Mr. McConnell, the majority leader, celebrated the success of Republicans who won election to the House and Senate, hailing their victories as decisive. But in the next breath, Mr. McConnell treated the outcome of the presidential election — based on the same ballots that elected those Republicans — as merely “preliminary,” and hammered Democrats for calling on Mr. Trump to accept the results.”