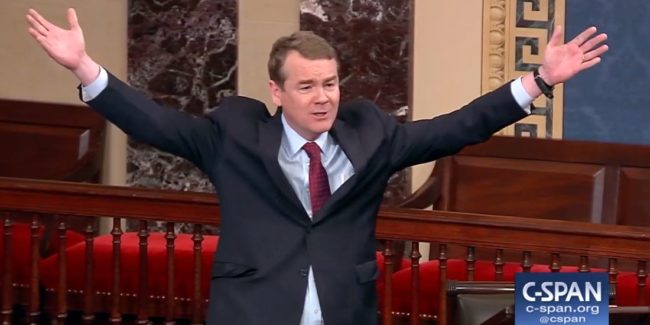 A powerful speech delivered yesterday by Sen. Michael Bennet, senior Senator from Colorado, tearing into his Republican colleagues for “stealing the authority of the Founders in an effort to conceal their reactionary project”–“to protect their power and call it freedom: freedom to enslave; freedom to segregate; freedom to pay workers less than they can live on; to work them to death; to fire them because of what they believe or whom they love; to redline our neighborhoods; poison our skies; defund our schools; and buy our elections.”

Judge Barrett’s confirmation will cement a 6-3 majority on the Court that will allow the powerful to do what they want, while standing against the American people’s efforts to protect one another, to support one another, and to invest in each other through our democracy.

We are not the first generation of Americans to face a Senate or a Supreme Court that will stand with the powerful against the people. We are not the first citizens to run into a wall of obstruction as we work to make this country more democratic, more fair, and more free.

We have to learn from the examples of those who came before us. Those who answered slavery with emancipation and Reconstruction; a Gilded Age with a Progressive Era; a Great Depression with a New Deal; Jim Crow with Civil Rights.

As it was for them, so it is for us to meet the challenges of our time. And unlike the forces that have brought us to this low point, we have a much harder job, because we have a far greater purpose.

Theirs has been to grind our democracy into rubble. Ours is to build a strong foundation for the American people and the next generation.

The final vote to confirm Amy Coney Barrett remains scheduled for today, and President Donald Trump reportedly intends to swear her in tonight. That inevitability is acknowledged by Bennet in his speech opposing Barrett’s confirmation, along with what comes next:

It won’t be easy. It won’t be easy, but anyone who’s studied the history of our country, our democracy, knows how hard it is to make progress. It’s never easy.

Sen. Bennet is correct, the damage done in four and a half years of Republican Supreme Court treachery will take more than one election to undo–but a week from tomorrow is when the journey back from this nadir begins.