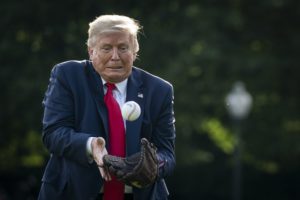 And that’s the ballgame

Tonight is the final Presidential candidate debate of the 2020 election cycle. The good news, if you are a supporter of President Trump, is that it will be physically harder for Trump to continually interrupt Democrat Joe Biden or NBC News moderator Kristen Welker.

The bad news? Well, pretty much everything else, as NBC News reports:

President Donald Trump is expected by aides and advisers to raise Hunter Biden and China throughout the final presidential debate here on Thursday and has been counseled by allies not to interrupt as much as he did in the first faceoff.

Trump allies are hoping that if Joe Biden is given more time to speak than in the first debate — when Trump repeatedly interrupted him — it will provide an opportunity for Biden to make a gaffe or give answers they believe will hurt him with voters. It’s unclear though how much Trump will follow that strategy, since he disregarded much of the advice he was given before the first debate.

Trump has done even less traditional debate prep for this second and final contest, according to multiple people familiar with the discussions. A few back-and-forth practice meetings took place on Air Force One over the last week while the president was traveling to battleground states. Those sparring rounds were more topic-oriented discussions with aides, however, and did not resemble formal sessions.

It appears that the best the Trump campaign can hope for is that Joe Biden makes some sort of massive mistake tonight in Nashville, TN. Otherwise, Trump seems prepared to just dish red meat to his base instead of trying to actually sway uncommitted voters his way.

Tonight’s debate is scheduled to air at 7:00 pm on pretty much any channel you choose.