Szabo vs TKT: The Bellwether County Commish Race In Colorado 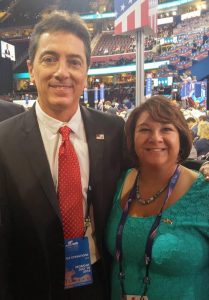 With so much attention focused at the top of the ticket in this highest-stakes-ever presidential election year, the situation down the ballot is as always somewhat less clear than the emerging consensus in polling locking down the big races. It’s generally expected that voters in Colorado will be engaging in much less “ticket splitting” in 2020 than was the case in previous election cycles, owing heavily to the declining Republican brand and a strong sense among voters that Republicans at all levels have enabled the President they’re turning out in droves to vote out.

In one particular race in Colorado’s bellwether Jefferson County, the Jeffco District 1 commissioner’s race, there’s a change quietly unfolding that packs more political importance than meets the eye at casual glance. Outgoing Democratic Rep. Tracy Kraft-Tharp, termed out of the swing HD-29 seat she ably defended for Democrats for eight years, is running against former HD-27 Republican Rep. Libby Szabo. Szabo was appointed to the Jeffco board of commissioners in 2015 to replace “serial job jumper” Faye Griffin, another peculiarity of Jeffco politics we’ve discussed at length in this space.

Readers will recall that Libby Szabo’s term in the Colorado House was marked by distasteful wedge-issue crusades that made her a brief Fox News Channel celebrity and GOP convention speaker after she claimed that Colorado’s first LGBT House speaker was “protecting” pedophiles. Szabo’s base of support in HD-27 was (and still is, presumably) the notorious evangelical megachurch Faith Bible Chapel in Arvada, where her husband Denes Szabo taught a Bible study class on the ways Barack Obama fits the description of the Antichrist.

In a county that has served for decades as a leading indicator of Colorado’s political trends, Szabo’s re-election bid in 2020 after narrowly holding the seat in 2016 is definitely one to watch as an indicator of how far down the ballot Jeffco is trending blue. In previous years, swing voters disaffected with Republican choices at the top of the ballot would look elsewhere to “compensate” and retain their self-image as a voter unbeholden to either party. In 2018, the sweep of the statewide offices of AG, Secretary of State, and Treasurer in Colorado led a rout down the ticket that signaled the end of this psychological need on the part of voters to balance out their votes in the big races.

That’s bad news for Libby Szabo–and for Jeffco voters who do the homework, they’ll find that Szabo embodies every problem they have with Republicans writ large.