Don’t Believe The Hype: Cory Gardner Did This To Himself 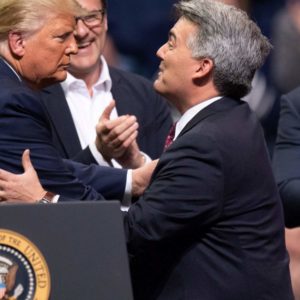 We’re 17 days out from the 2020 general election, and in Colorado certain inevitabilities are beginning to come into focus. Driven by unprecedented early turnout overwhelmingly led by Democratic and what’s assumed to be left-voting unaffiliated voters, an historic landslide election is shaping up for Colorado Democrats once again–with a strong possibility of further growing already historic majorities won in the 2018 midterms.

With Joe Biden polling as high as 14 points ahead of Donald Trump in Colorado, and by all expectations very little ticket-splitting expected from Colorado voters in 2020, it’s easy to make excuses for the impending doom surrounding the campaign of Republican incumbent Sen. Cory Gardner, down by a least 10 points in every recent poll. And as we saw first yesterday in a story from the Denver Post’s Justin Wingerter, the pre-post-mortem spin of Gardner’s fate by Republicans is already underway:

“My perception is that Cory and his allies have together bought a huge amount of television time. At some point, does another $100,000 make any difference? I’m not sure it does,” said Dick Wadhams, a former Colorado Republican Party chair who has managed successful U.S. Senate campaigns.

“Cory’s problem is not that he does not have enough money in his account or that there’s not enough spending on that side. Cory’s biggest problem right now is the national political environment, and that has been driven by President Trump’s numbers against Joe Biden,” Wadhams said. “I’m not sure any money can offset that right now.”

CBS4 Denver echoed this scripted pre-buttal to defeat from former Colorado GOP chairman and longtime Republican campaign manager Dick Wadhams, who whatever else you can say about the man knows what losing looks and feels like:

“There still is a great deal of enthusiasm among Republicans for the president and Cory Gardner but I’m not going to to kid you or anybody else, Trump is a liability to Cory Gardner.” [Pols emphasis]

“It comes under the heading of life isn’t fair and neither is politics. Cory has run a magnificent campaign, he’s probably one of the best candidates we’ve ever fielded for statewide office in decades. John Hickenlooper, in my opinion, has been a miserable candidate with a campaign to match. Yet he might win this race solely because of the national political winds.”

“That’s just the brutal reality. I think Mike [Dino] and I have both been in politics long enough to know that sometimes there are factors beyond your control. In this case, that’s the case with Cory.”

This is a tempting story for Colorado Republicans to internalize, though they won’t be able to fully accept it until after Trump’s expected defeat in two and a half weeks. Cory Gardner wasn’t beaten on the merits, they’ll say, he was washed away in a wave against Trump from which no Republican was fully spared. It’s not that the voters rejected Cory Gardner, they’ll say, or Republican legislators who lose their seats with him. “National political winds” sealed the fate of these poor innocent bystanders.

And it’s completely wrong. Republicans seeking to blame losses in 2020 on “national political winds” are ignoring the extent which the GOP was rejected all the way down the ballot by Colorado voters in both 2016 and 2018. Every election in Colorado since Gardner’s narrow victory in 2014 has resulted in big losses for Republicans at all levels, including in 2016 when Trump lost Colorado–albeit by a smaller margin than the polls show Trump losing in 2020. As for John Hickenlooper’s supposed “weakness” as a candidate and Gardner’s “magnificent campaign,” it’s just a silly fictionalization of actual events. Republicans invested basically their entire campaign against Hickenlooper in Frank McNulty’s wildly overhyped ethics complaint, while Gardner became a national symbol of Republicans’ willful refusal to acknowledge Trump’s failed presidency. Gardner was considered one of the most vulnerable incumbent Republican Senators up in 2020 all the way back in January of 2019, when polls showed him losing by a wide margin to a generic Democrat.

We’ve sometimes wondered whether Colorado’s U.S. Senate race would look different if Gardner had taken a different path after Trump’s election, the path he started down when he declared “I cannot and will not support someone who brags about degrading and assaulting women” and called for Trump to pull out of the race in October of 2016. The final abandonment of this once-honorable position for Gardner in last Tuesday’s debate, when Gardner said Trump is an “ethical and moral man” without ever reconciling this with this previous words.

Obviously had Hillary Clinton prevailed in 2016 as Gardner and everyone else expected, this year’s elections would look different. But if Gardner had approached Trump’s victory with the wariness of fellow GOP Sens. John McCain, Ben Sasse, and later Mitt Romney among other examples he served with in the U.S. Senate, would Gardner be losing by the double-digit margin he is today? The answer is maybe not. But when you consider other issues like the Affordable Care Act, which Gardner vilified throughout his career in federal office and now polls better than at any time in its history, or abortion, the issue Gardner was able to gum to death in 2014 but now looms large before an expected 6-3 conservative Supreme Court, there’s just no reason to believe Gardner would be winning this essentially blue state today no matter how he had dealt with Trump. And that’s before you factor in what the proselytized GOP base does to Republicans who stray from the MAGA party line.

From Obamacare to embracing Trump to the treachery Gardner joined in against Merrick Garland, Cory Gardner made conscious choices that led to the electoral abyss. Gardner didn’t have to morph shamelessly from one of Trump’s harshest critics to closest allies. Likewise, Colorado Republicans as a whole didn’t have to lurch out of the mainstream under Patrick Neville and Ken Buck. If Colorado Republicans take the easy way out of reckoning their losses in 2020 from Cory Gardner on down, blaming externalities instead of looking inward, they are setting the stage to become a permanent minority.