Have you seen this man?

As The Denver Post reports, at least two members of Rep. Doug Lamborn’s Washington D.C. staff have tested positive for COVID-19. The Colorado Springs Republican himself is allegedly refusing to be tested and is running around in Colorado attending fundraisers.

“The deputy chief of staff, who is also the legislative director, started feeling unwell sometime around Thursday or Friday and tested positive for COVID over the weekend,” one of Lamborn’s staffers told The Post.

“The chief of staff called and told us about the one positive case,” the source said. “Three or four more people are experiencing symptoms. … It was recommended that they not tell their roommates.” [Pols emphasis]

The information was confirmed by a second Lamborn staff member… 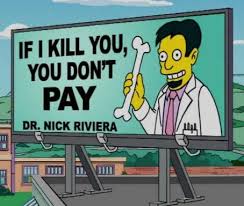 A spokesperson for Lamborn says that the Congressman has “been in contact with a physician,” which is kind of like saying you called a mechanic to report that your car won’t start. According to the spokesperson, Lamborn reported feeling no symptoms and was told that he didn’t need to take a COVID test or self-quarantine.

Now…we’re not doctors, but if some of Lamborn’s top staffers tested positive — and everybody works in the same building where there is a known coronavirus outbreak — then either Lamborn wasn’t being straight in his conversation or his physician is Dr. Nick Riviera.

Lamborn doesn’t want to be diagnosed with COVID-19 for a number of reasons, including the fact that it would contradict his own stupid-ass logic about the coronavirus. In August, Lamborn penned an Op-Ed for The Washington Examiner that concluded with this prediction about America’s battle with COVID:

Defeating the pandemic is now acknowledged by pundits on both ends of the spectrum as Trump’s finest hour.

Uh…maybe? Lamborn’s prediction was that this consensus would ultimately be formed in August 2021, so there is still time for his crystal ball to be proven accurate.

In the meantime, do not go anywhere near Doug Lamborn if you happen to spot him in the wild in the next few weeks.