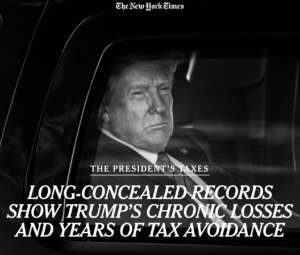 Even if you have been living under a rock lately, chances are still pretty good that you’ve already heard about the big news surrounding President Trump’s personal finances — including $421 million in debts (which might be a low estimate) and the $750 that Trump paid in federal income taxes in recent years.

The New York Times dropped a bombshell of a story on Sunday that not only shows that Trump pays less in taxes than the average American family — it also completely demolishes his image/brand of being an ultra-successful businessman and calls into serious question his true motive for running for President in 2016 (and for re-election in 2020). We’d encourage you to read the Times story yourself, or at least take a look at this shorter breakdown of the Times’ key findings.

As Chris Cillizza writes for CNN, these new revelations indicate that Trump’s political ambitions were initially just a branding exercise:

[Trump’s] situation was different in 2015. He was no longer riding high financially or otherwise. He was seen less as a business titan and A-list celebrity — and much more as a a cultural curiosity, a sort of has-been throwback to the 1980s. Flirting with a run for president wasn’t enough; he needed to go further this time as a way to restart a flagging brand…

…Running for president was one of the last cards Trump had to play. His candidacy was borne of desperation, not of a desire to serve. Which we kind of always knew.

But with the Times’ tax revelations, we can now say so definitively. [Pols emphasis]

Trump probably didn’t expect to make it to the White House when he kicked off his Presidential bid in 2015. But even getting close to winning made him a serious national security threat. As Bloomberg News explains, Trump might actually be facing debts of somewhere in the neighborhood of $1.1 BILLION, which would make him an easy mark for foreign governments to prey upon:

Trump has been bloviating about being worth $10 billion ever since he entered the 2016 presidential race, a figure that simply isn’t true. He’s worth a fraction of that amount, and the larger his indebtedness becomes, the more strain it puts on his assets. The Covid-19 pandemic has taken a particularly brutal toll on the sectors in which the Trump Organization operates — real estate, travel and leisure. If Trump is unable to meet his debt payments, he’s either going to have to sell assets or get bailed out by a friend with funds. Trump has never liked to sell anything, even when it’s hemorrhaging money. So if he’s tempted to save himself by getting a handout, that makes him a mark.

If Trump was still just a reality TV oddity, that wouldn’t be earthshaking. But he’s president, and the trade-offs someone like him would be willing to make to save his face and his wallet taint every public policy decision he makes – including issues around national security.

Trump’s persistent refusal to release his tax returns remained a big issue even after Election Day in 2016. Colorado Sen. Cory Gardner (R-Yuma) addressed the issue with this ridiculous comment in early 2017 that has certainly not aged well:

GARDNER: The issue of the tax returns, I think everybody should should have the opportunity to, to release their tax returns. [Pols emphasis] And that’s, uh people in the state legislature and people running for Congress. I’ve done that, others have, and I think everyone should. So I think I agree with you there. It shouldn’t just be about President Trump, it ought to be about President Obama, President Bush it ought to be about whoever is running for president, Hillary Clinton, you name it, and they should have done that. So…