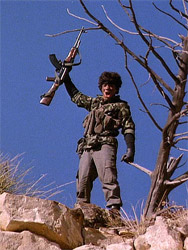 “We didn’t have the financial or human resources to do two major programs at the same time,” Hampton said. “Lynx reintroduction has been a success so the wolverine has come back around.”

…The wolverine, from the same family as the weasel, resembles a bear and weighs 55 to 70 pounds. It is noted for its incredible strength and ferocity.

It’s possible we’ve got one (or more) details of this story confused with 1980s popular culture, but there’s one thing we do know: Colorado wolverines hate Russians. And Cubans. And maybe even the Chinese.