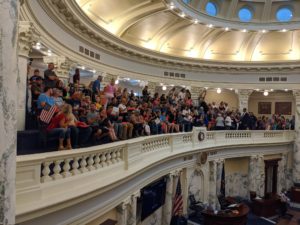 Maskless protesters pack Idaho House gallery after smashing a door to get in.

Angry, maskless spectators forced themselves into the Idaho House special session on the coronavirus pandemic Monday, shattering a glass door, rushing into the gallery that had limited seating because of the virus and forcing lawmakers to ask for calm in a crowd that included a man carrying an assault-style weapon…

People not let into the House gallery over social distancing requirements began chanting and banging on the glass doors. Witnesses said the crowd appeared to surge forward and the glass broke, and some people rushed in to fill the gallery.

“This is our house,” said Allen Clark of Meridian, who was among those who got in. “We own this house. We pay taxes. We’re citizens of Idaho. Why can’t we be allowed in a public meeting?” 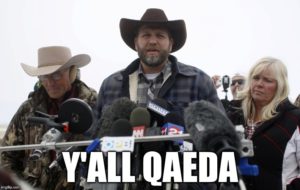 As the Idaho Press reports, none other than Ammon Bundy, made famous during the armed occupation of Oregon’s Malheur Wildlife Refuge in January, 2016, showed up for the door-smashing gun-toting jamboree. Who the hell needs Antifa?

Ammon Bundy accused lawmakers of “the mindset of a nanny state, where the people are considered incapable … without government institutions or their agencies.” He called that “offending and demeaning to all Idahoans, saying, “The Idaho people are more than capable of keeping themselves safe. They are more than capable of driving the greatest economy that any state has enjoyed. … We the people are tired. We are tired of government force, and we will only take it for so long. I recommend you act wisely, because we will not live in fear. Thank you.”

Susan Proster of Boise said, “I strongly urge you to listen and take heed to what we the people are trying to express to you. We are your voices. We need to you to represent us. I urge you to vote ‘no’ on these bills. … The only immunity we are interested in is herd immunity. Stop the madness, it’s the flu. Thank you.” [Pols emphasis]

Thus proving a rule we’ve found credible: anything bad happening in the world…is worse in Idaho.

It’s true. And it’s a shame, because Idaho is pretty in spots.