Entrepreneur and musician Kanye West has filed to be on the ballot in Colorado as an unaffiliated candidate for president of the United States. The deadline to file paperwork to get on the Colorado ballot was 3 p.m. Wednesday.

“Mr. West’s campaign has filed the paperwork along with the $1,000 filing fee. Our office will still need to review that the presidential electors filed are registered Colorado voters before his paperwork is confirmed as complete,” said a spokeswoman for the Colorado Secretary of State’s Office. West needed to submit the names of nine voters who pledged to support him in the race and to represent him in the Electoral College should he win Colorado.

I’ve confirmed with the Colorado Secretary of State’s Office that “Mr. West’s campaign has filed the paperwork along with the $1,000 filing fee.” https://t.co/nPIZXG9ncg #copolitics 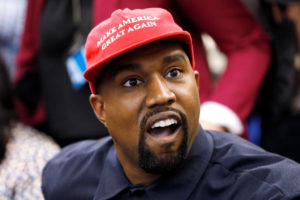 Vice’s Cameron Joseph reports–are you “in on the joke?”

A top Colorado GOP strategist is helping Kanye West to get on the ballot in her state, the latest in a series of Republicans who have stepped up to help the hip hop star in his odd presidential bid.

Rachel George, a longtime Republican operative in Colorado, sent an email to at least one other local GOP strategist on Tuesday asking them to sign West’s Presidential Electors’ Acceptance of Nomination form so he can appear on the ballot in Colorado…

News that ex-Cory Gardner spox and local Republican fixture Rachel George, one half of the Andy and Rachel George full-time political operative couple on the ground in Colorado for many years now is taking money from Kanye West for “Ye’s” on-again, off-again, and probably off-again-for-good soon presidential aspirations is not in itself evidence of a Republican conspiracy to split Colorado non-Trump votes in November. As the old saying goes, a check is a check–and plenty of people on both sides have gladly taken money from campaigns they weren’t truly invested in heart and soul (see: Bloomberg, Michael).

But as Vice continues, it’s clear that whatever bedevilment opportunity Kanye might afford Colorado Republicans in their uphill struggle this year against majority Democrats is at least partly factoring into Rachel George’s thinking:

It’s clear from the tone of the email, obtained by VICE News, that she thinks it’s a rather funny, last-minute effort to mess with Joe Biden and Democrats.

“I have the most random favor to ask of you ever… would you help me get Kanye West on the ballot in Colorado? No, I am not joking, and I realize this is hilarious,” she wrote.

Later, George says she’s looking for operatives who are “in on the joke” to help West get on the ballot. [Pols emphasis]

What say you, readers? How many votes is this “joke”–which we know is a joke, and Rachel George knows is a joke, but sadly Kanye West himself might not actually understand is a joke–worth Colorado Republicans in votes that might have otherwise gone to Joe Biden? Our guess is not very many, but in the situation they’re in today, any advantage helps.

And, you know, a check is a check.