At Least He’s Not Your COVIDiot Representative 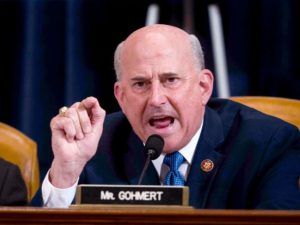 Rep. Louie Gohmert — a Texas Republican who has been walking around the Capitol without a mask — has tested positive for the coronavirus, according to multiple sources.

Gohmert was scheduled to fly to Texas on Wednesday morning with President Donald Trump and tested positive in a pre-screen at the White House. The eighth-term Republican told CNN last month that he was not wearing a mask because he was being tested regularly for the coronavirus.

But in a video interview today, GOP Rep. Louie Gohmert of Crazypants, Texas was not wearing a mask–and had this to say about having been made against his freedom-loving American will to wear one occasionally in previous weeks in the course of his duties:

GOHMERT: I can’t help but wonder if by keeping a mask on and keeping it in place that if I might have put some of the virus under the mask and breathed it in. [Pols emphasis]

After the news broke that Rep. Gohmert’s cavalier attitude about protecting himself and those in his orbit from catching COVID-19 had resulted in…well, what any sane person would have expected to happen, Gohmert catching COVID, a member of Gohmert’s staff sent this exasperated message to Sherman:

PLAYBOOK PM: After we reported that @replouiegohmert was positive, we got an email from a Gohmert aide. pic.twitter.com/x31CSOdkLf

What an amazing work environment! Everyone has to come into the office and keep masks off so America looks “open”–and when the boss gets COVID, the staff finds out about it in a news story. We can’t imagine why the staff would rat Rep. Gohmert out to a reporter.

Politicians and bosses of America, this is how turnover happens.