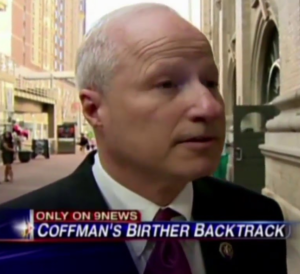 Mayor Mike Coffman’s foot has met his mouth before.

The Denver Post’s Shelly Bradbury followed up the story originally broke by Kara Mason at the Aurora Sentinel over the weekend, former Republican Congressman now Aurora Mayor Mike Coffman’s now-deleted outburst on social media following more protests over the killing of Elijah McClain calling a faction of the protesters who smashed windows at the Aurora municipal complex “domestic terrorists” who “must be treated as such.” Coming from a guy who celebrated his love for the infamous Guantanamo Bay detention center in Congress, this had the effect of understandably freaking out the good citizens of Aurora.

With that said–and never able to be unsaid–Mayor Coffman wants you to know calling protesters who smashed windows “domestic terrorists” “was not appropriate.” If that’s deja vu you’re experiencing, hold that thought!

The mayor in an initial statement Sunday called that smaller group of demonstrators “domestic terrorists,” but deleted that phrase in a revised statement.

“I took it right down after I put it up,” he said. “The reason I took it down is it’s not appropriate. When we think about domestic terrorism in the United States, it’s the bombing of the federal building in Oklahoma City in 1995, or the Pulse nightclub in Orlando in 2016, where the target is human beings, and certainly that was not the case here,” he said. “It’s hard to define what this is, so out of frustration I put that up, but I took it down right away.”

“It’s hard to define what this is?” Having seen the same pictures everyone else has, it looks to us like some protesters smashed some windows. That’s bad. We don’t condone smashing windows. But smashing court house windows during a protest is not “terrorism” by any commonly accepted definition of that inflammatory word. Given what Coffman has justified in the past doing to “terrorists” as a “War on Terror” Republican member of Congress, this was a disturbing betrayal of far more negative sentiment toward the protesters against the killing of Elijah McClain than anyone could have imagined.

As our readers know, this is not Mike Coffman’s first trip to the woodshed after letting his inner asshole slip out into the permanent record. In 2012, then-Rep. Coffman told Elbert County Republicans, “I don’t know whether Barack Obama was born in the United States of America. I don’t know that. But I do know this, that in his heart, he’s not an American. He’s just not an American.” Once Coffman realized these remarks had been recorded for posterity, Coffman issued a series of successively more abject apologies–the second one coming after a humiliating on-camera ambush in which Coffman robotically recited the words “I stand by my statement that I misspoke and I apologize” over and over.

When Coffman said President Obama “is not an American,” despite his apology it was difficult to accept the suggestion that Coffman had simply “misspoke.” The specificity and contemplative delivery of those words shows that Coffman did not “misspeak”–he said something objectively horrible, with deliberation, was caught saying it, after which the only thing he could do to save himself politically was apologize. Sometimes such incidents end political careers. But today, Mike Coffman is Mayor of Aurora.

And still…misspeaking. The one thing we can’t call that is surprising.