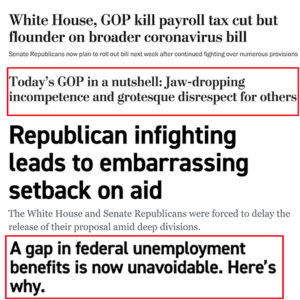 The U.S. House of Representatives is in session today. The U.S. Senate…is not.

The House passed a massive coronavirus relief package in May called the “Heroes Act.” The Senate has not taken up this legislation and has instead tried — and failed — to craft something of its own. Extended unemployment benefits passed by Congress in March will expire at the end of this month, but Senate Republicans were unable to come up with a plan to help the 20-25 million unemployed Americans who desperately need this assistance. So they went home for a 3-day weekend, saying they’ll try again next week.

Quite the conundrum, eh?

One of the major holdups is that Senate Republicans can’t agree on how much to reduce the $600 weekly benefits that some worry are a “disincentive” to seek employment (nevermind that such employment may not exist at the moment). As The Washington Post explains:

In practice, the jobless benefit lapse means that millions of workers are seeing their last enhanced benefit payment this week.

You may not be able to pay your rent at the end of next week, but that’s apparently not a huge concern for Senate Republicans, who have been screwing around with this proposal for two months and were in no hurry to move things along while they gathered for lunch on Thursday: 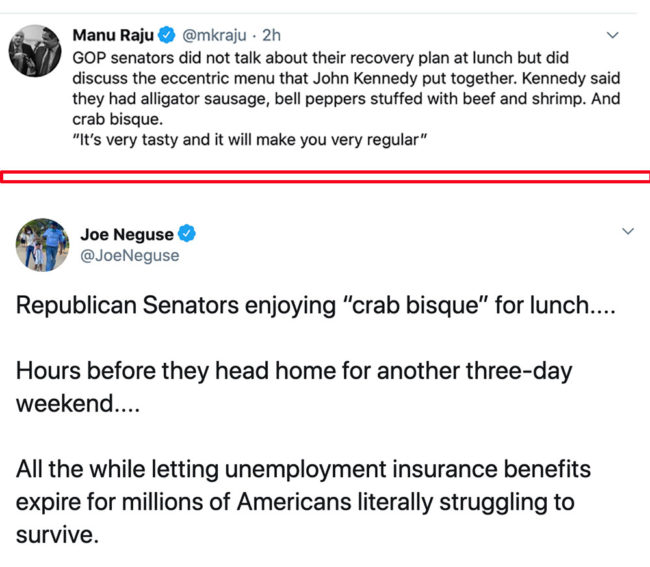 Oh, and if you’re wondering: Sen. Cory Gardner (R-Yuma) rushed back to Colorado today for a photo op in Greenwood Village with First Daughter Ivanka Trump.

This Sunday will mark 100 days to go until the November 3 election.