UPDATE: Gov. John Hickenlooper’s campaign joins the call to pull the ad off the air:

Erin Martinez is absolutely correct — Washington Republicans must take down their ‘horrifying’ and false attack and stop exploiting this tragedy and distorting the facts to score political points.”

Erin Martinez, who survived the 2017 Firestone explosion that killed her husband and brother, says in a statement that the NRSC should take down an ad about the blast.

“This ad uses my story in a negative light and disgraces the memory of Mark and Joey.” #cosen #copolitics pic.twitter.com/ZqMJ1vUub0 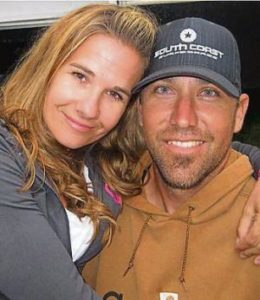 Erin Martinez, with her husband Mark who died in the April 2017 Firestone home explosion.

Here’s the statement today from Erin Martinez, who survived the explosion in Firestone that destroyed her home and claimed the lives of her husband and brother:

I woke up this morning to hear about a horrifying political ad using images from the explosion and fire that destroyed my life and killed my husband Mark and my brother Joey.

My family and I have worked extremely hard to create positive changes that will keep my story from happening to anyone else and in doing so, honoring the memories of Mark and Joey. Not a single day goes by that we are not heartbroken and struck with unimaginable grief. This ad uses my story in a negative light and disgraces the memory of Mark and Joey.

But in a statement this afternoon, NRSC spox Joanna Rodriguez says sorry, horrific tragedy survivor, but our ad misrepresenting the death of your husband and brother is not coming down:

The kind of grief Ms. Martinez and her family have survived is unimaginable, and their public fight to keep other Colorado families safe is incredibly important. John Hickenlooper said he was going to do the right thing to protect Colorado families right after the explosion, but then a private donation to his office from the gas company responsible changed that. He looked the other way and, as The Denver Post reported in October 2019, left office without getting the job done.

Let’s start with the central claim of this ad, that former Gov. John Hickenlooper “let them get away with it,” meaning that Hickenlooper let Anadarko Petroleum “get away” with the explosion that killed Erin Martinez’s husband and brother. The investigation into the Firestone explosion took years to complete, and it’s true that Hickenlooper had left office by the time the Colorado Oil and Gas Conservation Commission (COGCC) levied an $18.25 million fine against the company who bought Anadarko after the disaster. But to simply claim “no fines under Hickenlooper” as this ad does, without explaining that the fines did indeed come after Hickenlooper left office as a result of the investigations launched under Hickenlooper’s administration is an outrageous lie of omission.

The purpose of this ad is of course not to advocate for any Republican position on the Firestone home explosion or the fossil fuel industry. Anadarko and its successor corporate parent Occidental Petroleum are in fact six-digit donors to the same NRSC running this attack ad. Anadarko also contributed richly to Sen. Cory Gardner’s election campaign in 2014, and Occidential has donated north of $12,000 to Gardner in the current cycle. The NRSC is arguing in this ad that Hickenlooper should have gone harder…on NRSC donors.

It’s quite ridiculous, and that’s before you process how deeply offensive it is to run this deceptive ad over the objections of the survivor of the tragedy depicted. If Republicans want to demoralize Democratic voters by hypocritically attacking Hickenlooper on energy whole themselves bankrolled by the energy industry, that’s one thing. But this attack is hypocritical, mendacious, and exploitative of tragedy all wrapped up in a single thirty second TV spot. It’s breathtakingly desperate stuff, and we have to think it’s going to backfire spectacularly on the NRSC.