Colo Republicans Joining Social Platform Parler, a “Safe Haven” For Those Too Extreme for Twitter

Following the lead of Trump administration officials and campaign staff, several Colorado Republicans are joining the conservative social media site Parler, which is best known for allowing users to post misinformation or extreme statements typically blocked by Twitter or Facebook.

Following Twitter’s flagging of several of President Trump’s recent tweets for violating it policies on misinformation and encouraging violence, the Trump administration and campaign have both ramped up activity on Parler. White House press secretary Kayleigh McEnany, Eric Trumpm, and several GOP senators joined the site.

Campaign digital media director Brad Parscale, who’s been on since the site launched in 2018, recently tweeted, “Hey @twitter, your days are numbered.”

Buck launched his account with a series of posts about the removal of statues and monuments honoring historical figures and accusing Democrats of “ignoring their racist past in order to gaslight the American public.”

Gardner appears to have joined with both his official and campaign brands, though neither account is verified nor has he posted, or written a “Parley,” to use the site’s terminology. 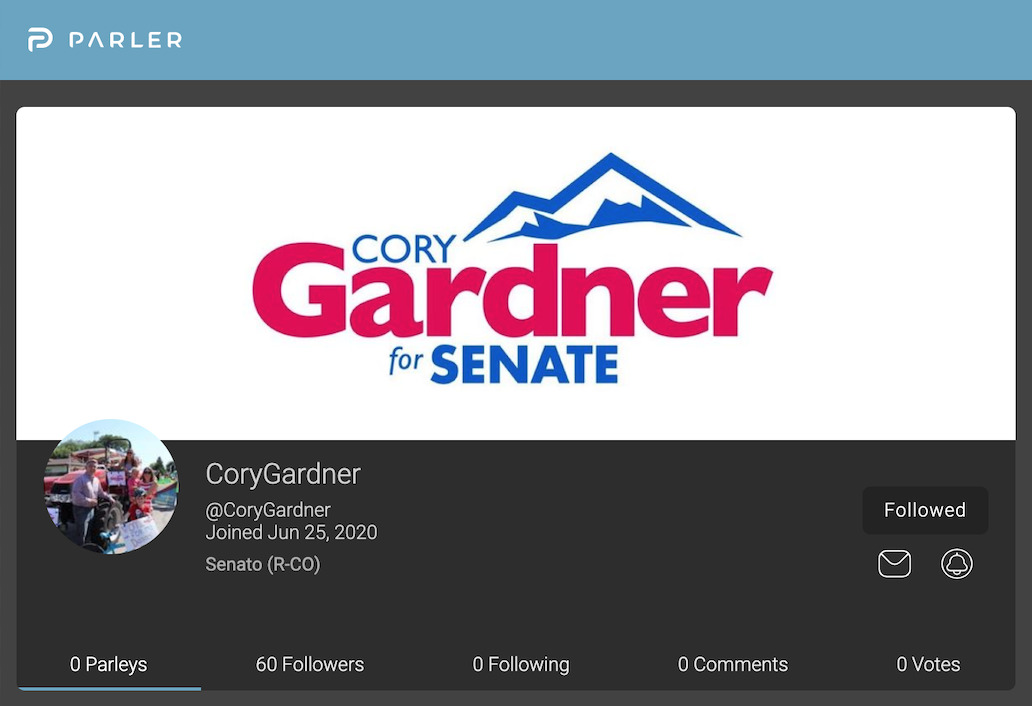 A call to the Gardner for Senate office inquiring whether the account was created by the campaign was not immediately returned.

Gardner’s official account doesn’t even have a profile image yet, though it does have 153 followers, over double the audience of his branded campaign account.

An email to the senator’s press secretary attempting to confirm the authenticity of the account was not immediately returned. This post will be updated with any response received.

Neville also created two accounts, a personal and an official one. He has posted several times on the personal account but has yet to use the official one.

She’s topped by far-right pundit Michelle Malkin who has 94,000. Both women’s accounts are “verified” by Parler, which is the site’s version of Twitter’s blue checkmark, indicating that the site stands behind the authenticity of the account’s identity.

The Proud Boys hate group, which had numerous Facebook accounts taken down last month also has a verified Parler account, lending weight to the argument that the site is welcoming to extremists. A recent “Parley” by the group promotes the debunked conspiracy theory that former Democratic National Committee staffer Seth Rich’s death was in fact a murder orchestrated by Hillary Clinton.

The same Proud Boys account also shared an “important mask safety video” showing someone burning a mask on a grill. The site lists over 3,200 posts using the hashtag, #NOMASKS.

This is how the Parler CEO describes their content policies pic.twitter.com/fiPnNCpxgd

Gardner, Lamborn, Buck and their Republican colleagues aren’t the site’s only Colorado connection. Matze and fellow founder Jared Thomson both graduated from the University of Denver, before launching Parler in 2018. As the site’s popularity has exploded in recent weeks, CEO Matze has expressed concern over the lopsided political demographics of its users. CNBC reported that he is offering liberal pundits with at least 50,000 followers on Twitter or Facebook a $20,000 “bounty” to join the platform.