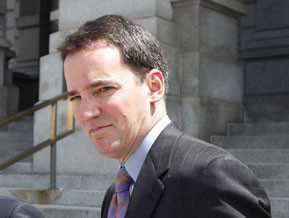 With Democratic ranks closing and polls signaling the outcome of the 2020 Democratic U.S. Senate primary election will not be close, the Denver Post’s Justin Wingerter adds to du jour reporting on the trouble challenger Andrew Romanoff has had laying claim to the mantle of “progressive champion” in the race to flank the frontrunner John Hickenlooper, after a long record of political centrism in office and as a candidate in prior elections based on political expediency.

The point is expressed by none better than the most authentic “movement progressive” who ran in the Democratic Senate primary, community activist Lorena Garcia:

Lorena Garcia, arguably the most progressive candidate to run for Senate in Colorado this year, disagreed often with Romanoff, whom she calls a “fauxgressive.”

“I think there are efforts to unify the progressives around Romanoff, but it’s not working,” Garcia said Wednesday.

“I think it’s not working because many of these progressive leaders who are now pushing energy his way had originally denounced Romanoff when he entered the race and are now trying to claim he is the progressive champion. This is not only insincere, it’s inauthentic, and progressives demand authenticity. People may still vote because he says the right things, but the excitement for this race is gone.”

Garcia’s complaint about Romanoff’s “inauthentic” brand echoes what we’ve heard from just about everyone who has actually been involved in Colorado politics going back to Romanoff’s heyday in the mid-aughts. Fifteen years ago, Andrew Romanoff was the epitome of a calculating technocratic centrist politician, no more apparent than in the 2006 anti-immigrant special session in which Romanoff permanently alienated many of the state’s politically involved Latinos. In 2014, when Romanoff had his sights on a swing congressional seat, he came out for a federal balanced budget amendment and turned against single-payer health care.

Because Romanoff in the 2020 primary has embraced all of the ambitious bullet points of the nationwide progressive Democratic agenda, there’s a natural tendency on the part of supporters of that agenda to channel their anger into this race as a proxy for the larger battle. The problem, as Garcia explains very well in today’s story, is that Romanoff is simply not a credible advocate for that agenda having campaigned on both sides of every major issue from energy to health care to immigration–and for all of the fervor of Romanoff’s supporters, this is why is has not been able to consolidate support even on the left side of the Democratic coalition.

If the polls are right, that will be the story of this primary.