Earlier this week we wrote about Republican State Senate candidate Suzanne Staiert, who is facing ethics questions of her own after making headlines as the lead attorney for a GOP-aligned “watchdog” group attacking former Gov. John Hickenlooper. Our post on Monday referenced a story written by Marianne Goodland of the publication formerly known as the Colorado Statesman — a story that so incensed Staiert that she was moved to demand space in the same publication to a) repeat the allegations against her, b) attack Goodland, and c) make some idiotic attempts at defending her actions.

Staiert’s response rant is really quite something, but before we dig into that, we’ll remind you of the background story here.

Staiert is the Republican candidate in a key swing district, SD-27 in Arapahoe County. She is also the attorney for  Frank McNulty’s “Public Trust Institute,” which spent the better part of the last two years tossing around 97 different complaints about Hickenlooper. She is also the attorney for an abortion ban initiative that will be on the Colorado ballot in November. Needless to say, Staiert is juggling a lot of different jobs at the moment, and they have recently intersected in a complicated manner.

As Goodland wrote on Monday for “Colorado Politics,” Staiert has some questionable connections to Independent Ethics Commission member Debra Johnson and is also facing a complaint with the Colorado Secretary of State’s (SOS) office over an inaccurately-filed personal financial disclosure document required of legislative candidates. As a former Deputy Secretary of State under Republicans Scott Gessler and Wayne Williams, Staiert should be intimately familiar with Colorado election and campaign finance laws, which makes her ethics allegations all the more confounding.

Now that you’re caught up, let’s get back to Staiert’s “In Response” rant. If you are going to clap back at a media outlet for reporting on a story, you damn well had better have your ducks in a row. Staiert…does not.

Without any evidence, Staiert blames Hickenlooper’s campaign for initiating a complaint with the SOS office related to her State Senate candidate filings:

It started with a campaign finance complaint about my personal financial disclosures. That’s a filing anyone running for office must make with the secretary of state. I’m running for a state Senate seat, and I filed mine in August of last year. The law allows two kinds of filings. One is a form that discloses only sources of income and obligations. The other is a tax return that discloses that and a lot more. After having lived through years of the tax return wars where candidates were hounded for this information, I decided to offer mine up. You’d think I’d be credited for being transparent. Nope.

Here’s the problem with this argument: The spirit of the Public Financial Disclosure (PFD) law is to disclose — upfront — the sources of your personal income so that voters can be aware of any potential conflicts of interest. As far as we can tell from the SOS database, Staiert is literally the only 2020 candidate to file a tax return instead of a PFD. Submitting a tax return shows your income from the previous year — NOT any current sources of income — which is quite obviously not the point of a PFD requirement. 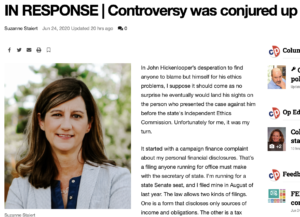 Not a good idea

Staiert apparently did file an official PFD on May 24…but it does not disclose any information about the Public Trust Institute. Multiple news reports have reported that Staiert is the lead attorney for PTI, so perhaps Staiert would have us believe that this is just a very time-consuming volunteer project on her part. But as Staiert writes later in her “In Response” Op-Ed:

I filed a response to the complaint and I also filed the disclosure form; so now I’ve filed twice. I have nothing to hide.

This might be perfectly true…if you consider repeatedly failing to disclose your primary source of income as the definition of “nothing to hide.” This is an important point to remember: In two separate filings, Staiert has yet to even acknowledge the “Public Trust Institute.”

From here, Staiert decides to blame the reporter — Goodland — for not seeking out information that did not exist, or something:

The problem with reporters who develop a narrative before they start writing is that the facts get in the way. That’s what happened in a recent Colorado Politics story about this non-event, so the facts had to be sacrificed (“Ethics problems once again plague Independent Ethics Commission,” June 22). Reading the story you’d think I’d never filed a single disclosure, let alone two, and you would be led to believe that filing this form was of the utmost importance because it would show my income. None of this is true. I disclosed everything in August and the second form I filed doesn’t even show my income. I am left to conclude the reporter did not review a single public document firsthand. [Pols emphasis]

This argument is patently ridiculous. If Staiert did “disclose everything” in August 2019, then why in the hell would she file an additional PFD in May 2020? (HINT: She wouldn’t)

Regarding allegations that Staiert failed to disclose a personal relationship with an IEC member (Johnson), here’s what Goodland wrote on Monday:

The relationship, which was not disclosed during the Hickenlooper hearings, involves how Johnson was named to the board and that she contributed to Staiert’s campaign for state Senate.

Staiert’s response is to acknowledge recommending Johnson for the IEC and admitting “I’ve worked for her and we crossed paths in Aurora years ago.” Staiert worked with Johnson for at least three years at the City of Aurora, when she was a city attorney and Johnson was the city clerk. More recently, Staiert worked under Johnson when the latter was the Denver Clerk and Recorder. Johnson also donated to Staiert’s State Senate campaign soon after Staiert filed as a candidate, which Staiert does acknowledge in an off-hand manner. It is disingenuous at best for Staiert to claim that she “crossed paths” with Johnson; this is sort of like saying that you’ve had “interactions” with your spouse from time to time.

As a general rule, it’s a terrible idea to respond to negative allegations about you or your campaign with a 944-word public screed repeating said allegations, but this would at least make some sense if Staiert was actually able to refute the charges. If you don’t have a good explanation for your actions, nobody is going to care when you say that a reporter and a U.S. Senate candidate are being mean to you.

We’ll be sure to publish Staiert’s inane response to this post as soon as we receive it.