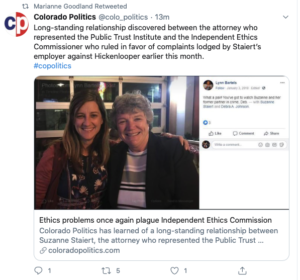 Republicans need a net gain of at least two seats in 2020 to take control of the State Senate, but before they can even think about a Senate majority, they absolutely must defend GOP-held seats in SD-8 (Carbondale-ish), SD-25 (Adams County), and SD-27 (Arapahoe County). Republicans have Sen. Bob Rankin in SD-8 (assuming he survives a Primary challenge) and Sen. Kevin Priola in SD-25, but they don’t have a well-known incumbent in SD-27, where incumbent Sen. Jack Tate declined to seek a second term following sexual harassment allegations.

The Republican candidate in SD-27 is Suzanne Staiert, whose name you may recognize as the attacking attorney for the “Public Trust Institute” regarding ethics complaints levied against former Gov. John Hickenlooper. As Marianne Goodland writes today for the publication formerly known as the Colorado Statesman, Staiert is, shall we say, ethically challenged:

Colorado Politics has learned of a long-standing relationship between Suzanne Staiert, the attorney who represented the Public Trust Institute, and Independent Ethics Commissioner Deborah Johnson, who ruled in favor of complaints lodged by Staiert’s employer against former Gov. John Hickenlooper earlier this month.

The relationship, which was not disclosed during the Hickenlooper hearings, involves how Johnson was named to the board and that she contributed to Staiert’s campaign for state Senate…

…Neither Staiert nor Johnson have disclosed their relationship or the campaign contribution in any ethics commission meeting dealing with the Hickenlooper complaint, nor in the hearings on June 4 and 5.

As Goodland reports, Staiert was actually one of the people who recommended that Johnson be appointed to Colorado’s Independent Ethics Commission (IEC) last spring. It is pretty damning that neither Staiert nor Johnson divulged this conflict of interest at any point in the last 18 months of discussions about Hickenlooper’s ethics charges.

But this isn’t Staiert’s only moral lapse, as Goodland continues:

Staiert also is currently under a campaign finance complaint for failing to fully disclose her personal financial information in the run for Senate District 27.

Staiert said she filed the correct information, but not as a cure. She is challenging the complaint because the Secretary of State’s office is applying the same rules to a candidate that it applies to an incumbent. “My finances aren’t complicated,” she told Colorado Politics.

What those disclosures would be expected to show is how much she was paid in 2019 as executive director of the Public Trust Institute as well as how much she made working for Johnson. [Pols emphasis] 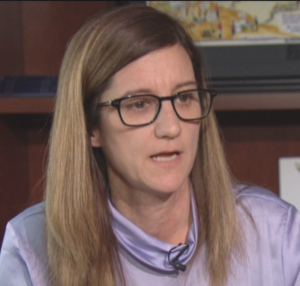 Suzanne Staiert is also the attorney for the “Due Date Too Late” abortion ban initiative.

If it is true that Staiert’s finances “aren’t complicated,” then it shouldn’t have been that hard to properly disclose that information as a State Senate candidate, right? This isn’t a particularly complex argument. Staiert also can’t really claim ignorance here; she served as Deputy Secretary of State under Republicans Scott Gessler and Wayne Williams.

When she’s not being asked to comment about Hickenlooper, Staiert has always been vague about her job with Frank McNulty’s “Public Trust Institute.” The Colorado Times-Recorder tried asking Staiert about her work with PTI in a story published in April:

Reached by phone via a contact number from a PTI press release, Staiert declined to comment, saying only that she isn’t the spokesperson for PTI before hanging up.

Staiert doesn’t speak for PTI, but she answers the phone number listed on the PTI press release? Makes sense.

…if the 2018 Democratic victories are indeed the new normal, with less split-ticket voting and Republican voters only making up one-third of all votes cast (and in reality higher turnout due to the presidential election probably means it will be even lower), it will be challenging for Republicans to hold this seat.

Staiert will face Democrat Chris Kolker in the General Election.