Trump Wants “Very Fine People” To Get The Message 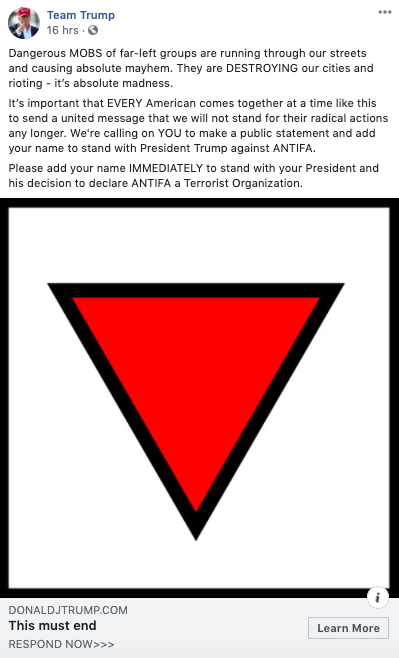 Media Matters for America posted a story today that has quickly turned into another major controversy for President Donald Trump’s re-election campaign–much like scheduling a rally on Juneteenth in Tulsa, an “error” so outrageous that it calls into question how it could have possibly been in error at all:

Since June 3, the Trump campaign has been running Facebook ads fearmongering about “antifa.” On June 17, the campaign added an inverted red triangle to some variations of the ad — a symbol the Nazis used to designate political prisoners…

On June 17, the campaign ran 88 ads on the Facebook pages for Trump, Pence, and Team Trump with an inverted red triangle. The red triangle was used for political prisoners in Nazi concentration camps.

…Historian Jacob S. Eder, an expert on the subject, told The Washington Post that the ad is “a highly problematic use of a symbol that the Nazis used to identify their political enemies. … It’s hard to imagine it’s done on purpose, because I’m not sure if the vast majority of Americans know or understand the sign, but it’s very, very careless to say the least.”

The Washington Post updates that the ads have been pulled by Facebook for violating their prohibition on hate speech and symbols:

“We removed these posts and ads for violating our policy against organized hate,” said Andy Stone, a Facebook spokesman. “Our policy prohibits using a banned hate group’s symbol to identify political prisoners without the context that condemns or discusses the symbol.”

Although the Trump campaign issued a perfunctory denial that the image was intended to represent the Nazi prisoner badge for a “political prisoner” such as a communist, there’s really nothing else it reasonably could be. And unlike the pink triangle which was politically reclaimed by LGBT activists during the AIDS crisis, evidence that the red triangle has been similarly appropriated by Antifa is thin at best.

And in this context, that would probably just make it worse.

It’s also true that Nazi symbology is not generally well known by the American public beyond the most basic of designs like the swastika, and a fair number of voters would see this ad and not have any idea what it originally stood for.

We submit to you that the targets of this ad may be, very precisely, the voters who know exactly what every Nazi symbol means. That’s a small but as we know in Colorado busy segment of the politically active population. There’s just not a satisfactory alternative explanation for the use of this specific image, and it appeals to an electoral niche known to be highly supportive of Trump.

And there have been so many such “coincidences.”