So, to say — as so many elected Republicans do — that they don’t have pay attention to what the President tweets is, on its face, deeply irresponsible. Monitoring what the President says, even if it’s as frequent and as frequently erratic as Trump’s tweets, has always been part of the job description for members of the House and Senate. You don’t get to not do it simply because a) it’s Twitter or b) you need an excuse not to respond to what the leader of your party tweets.

What Republican members of Congress are doing then is, to put it politely, a cop-out. They are pulling an ostrich move — burying their heads in the sand when it comes to Trump’s Twitter feed because they just don’t want to have to engage with what he is saying. 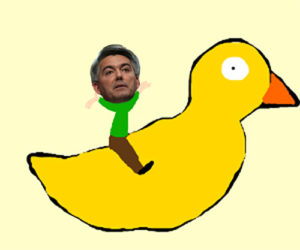 Former Republican Secretary of State Colin Powell made headlines over the weekend when he announced that he plans to support Democrat Joe Biden in November. Powell’s refusal to back President Trump was accompanied with an equally sharp condemnation of Congressional Republicans for enabling The Big Orange Guy.

Here’s what Powell said in an interview with CNN on Sunday about Trump gassing his way to a photo op at St. John’s church in Washington D.C.:

While we’re watching (Trump), we need to watch our Congress.

I watched the senators heading into the chamber the other day after all this broke, with the reporters saying, what do you have to say, what do you to say?

They had nothing to say. They would not react. [Pols emphasis]

Powell could have been talking directly to Colorado Sen. Cory Gardner (R-Yuma), who might be developing a hunched back after all of the effort he makes in ducking questions about Trump. For example, take a look at Gardner’s Twitter account in the week following Trump’s Bible-thumping stunt. Gardner’s account tweeted 19 times, which included 5 mentions of the Great American Outdoors Act; 5 mentions of the Paycheck Protection Plan (PPP); 7 messages about the coronavirus in general; and 2 Tweets commemorating the anniversary of D-Day in 1944. The number of comments about George Floyd, police reform, or nationwide protests? Zero.

Gardner tweeted two messages about Floyd and the protests, both on May 29. He’s said nothing, on Twitter or otherwise, since Trump had peaceful protestors gassed in Lafayette Park so that he could walk to St. John’s church.

In his quest to avoid angering President Trump and his voting base, Gardner regularly claims that he “didn’t see” or “didn’t hear” about controversial comments made by the President. He went back to that same ridiculous excuse again today when asked to comment on President Trump’s bizarre claim that a 75-year-old man who was shoved to the ground by police in Buffalo was actually an Antifa plant.

Sen. Gardner has not seen the tweet and didn’t want to look at it. Says he’s focused on his outdoors bill on the Senate floor and was in a rush to get up there

Burgess Everett, a congressional reporter for POLITICO, was prepared for Gardner’s “I didn’t see it” routine…but Gardner refused to even look at a copy of Trump’s tweet. He might as well have just stuck his fingers in his ears, closed his eyes, and yelled “I can’t hear you!”

Gardner’s cowardice is particularly odd when you consider that he wouldn’t exactly be going out on a limb in questioning Trump’s actions. After former Defense Secretary Jim Mattis called out Trump and said that the President is “trying to divide us,” Mattis was backed up by the likes of former White House Chief of Staff John Kelly and Republican Senators Lisa Murkowski (Alaska) and Rob Portman (Ohio). When Gardner was asked about Mattis, he literally just laughed.

If your idea of leadership is to duck and run whenever tough issues emerge, then Sen. Cory Gardner is definitely your guy. For the rest of us…the November Election is 147 days away.