Trump Says Today is the Best Day Ever! 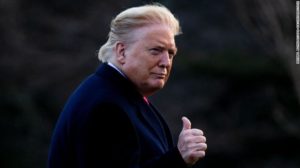 But black unemployment rose slightly from 16.7% in April to 16.8% in May, in a month the president declared a “tribute to equality” as the nation protests racial discrimination and police brutality. Mr. Trump also seemed to declare success after a week of protests that swept the nation.

When at the end of the president’s remarks, a reporter asked how it’s a victory when unemployment numbers increased for black and Asian-Americans, the president dismissed the question with a wave of his hand and suggested a strong economy will help address racial inequality.

No American, let alone a murder victim, has reason to celebrate 13.3% unemployment. Every Republican in America has a both political and moral obligation to loudly condemn this, though we already know that few if any will work up the nerve.

If you have any reserve of outrage left, this ought to set it free. We are in a rare condition of speechlessness.

President Trump said Friday that the greatest thing that can happen for race relations in the United States is a strong economy, after he was pressed on whether he has a plan to end systemic racism in the country…

…“It’s the greatest thing that can happen for race relations, for the African-American community, for the Asian American, for the Hispanic-American community, for women, for everything,” Trump said when asked if he had a plan to address systemic racism. “Because our country is so strong. And that’s what my plan is. We’re going to have the strongest economy in the world. We almost are there now. … And now we’re going to have an economy that’s even stronger.”

Earlier during his news conference, Trump called Friday a good day for the man killed in Minneapolis, George Floyd: but it was unclear what he meant. [Pols emphasis]

As the country erupts in protests over police brutality and racism, two-thirds of Americans think President Trump has increased racial tensions in the U.S., according to a new NPR/PBS NewsHour/Marist poll…

…Overall, 67% said Trump has mostly increased racial tensions, including 92% of Democrats, 73% of independents, 88% of Africans Americans and 63% of whites.

Just 18% said he has decreased tensions, including 41% of Republicans. In fact, almost 6 in 10 Republicans believe he has either increased tensions (29%) or are not sure (30%). That’s a finding the pollsters see as significant given how in lockstep Republicans have been with Trump on nearly everything. [Pols emphasis]

“It’s very unusual to see Republicans break when the name Trump is presented, but that is the case here,” said Lee Miringoff, director of the Marist Institute for Public Opinion, which conducted the poll.

It’s getting harder and harder for even Republicans to pretend they can’t see the thing that is right in front of them.