Conservation Colorado released new polling data today showing that Colorado voters overwhelmingly support three legislative proposals aimed at improving air and water quality in the state. These are interesting numbers, but what caught our attention was the favorable/unfavorable breakdown of Colorado politicians. Pay particular attention to the results for Sen. Cory Gardner (R-Yuma): 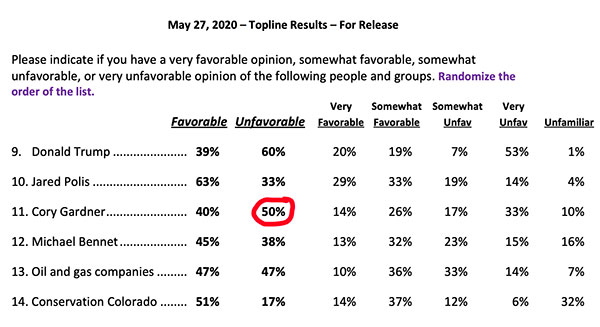 This is the appropriate reaction.

Earlier this month, in a different poll from Keating-OnSight-Melanson, Gardner crossed into the wrong end of the public opinion zone with a 53% total unfavorable mark, which was the first time we can recall that Gardner hit 50.

This new poll is the second of the month to confirm that at least HALF of Colorado voters are aware of Cory Gardner AND THEY DON’T LIKE HIM.

How does Gardner’s campaign spin this? At least he didn’t hit 60% disapproval?

As we’ve seen from other recent polls, Colorado voters aren’t particularly confused in their opinion of Gardner; only 10% say they are “Unfamiliar” with the Yuma Republican. And according to this poll from Conservation Colorado, Gardner even polls below “oil and gas companies” in terms of approval ratings. That’s…rough.

We wrote earlier this week that there is still time for Gardner to turn things around, but that might have been too generous. Gardner can really just hope that it doesn’t get any worse from here.