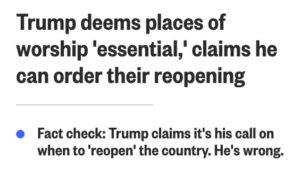 During an impromptu press conference on Friday, President Trump threatened to do a thing that he absolutely does not have the authority to do. From NBC News:

“The governors need to do the right thing and allow these very important, essential places of faith to open right now, for this weekend,” he said. “If they don’t do it, I will override the governors. In America, we need more prayer, not less.”

Trump did not say what legal authority he had to force governors, who maintain the power to order establishments to remain closed during public health emergencies in their own states, to make such a move if they disagreed. [Pols emphasis] 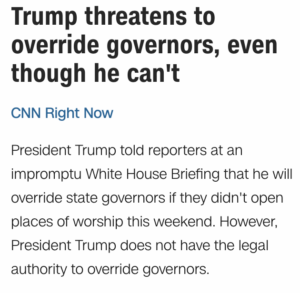 It’s been interesting to watch news outlets pushing back so quickly and forcefully on Trump’s Friday threats.

All of this stuff about the governors’ having to call him to get permission is made up, and there’s nothing he has the power to make happen this weekend.

As The Associated Press reports, governors aren’t listening, either:

Rhode Island Gov. Gina Raimondo said she was sticking to her timetable to allow worship services to resume May 30. She said houses of worship won’t be ready before then.

“We’re not ready. Honestly, that would be reckless. It’s Friday. They’re not ready,” said Raimondo, who added that congregations need to time to figure out distancing and cleaning procedures. “So no, that’s not happening in Rhode Island.”

If Trump really believes he can order states to allow churches to reopen this weekend…he’s about the only person who does. From Vox.com:

Notably, when reporters asked White House press secretary Kayleigh McEnany to identify which provision of federal law permits the president to override a governor’s public health order, McEnany did not do so. Instead, her answer —”the president will strongly encourage every governor to allow churches to reopen” — appeared to concede that Trump only has the power to try to persuade governors to change their policies. [Pols emphasis]

The next obvious question about Trump’s unexpected rant is, “Why?” As POLITICO reports, Trump may be panicking over bad poll numbers with conservative Christian voters:

The anxiety over Trump’s standing with the Christian right surfaced after a pair of surveys by reputable outfits earlier this month found waning confidence in the administration’s coronavirus response among key religious groups, with a staggering decline in the president’s favorability among white evangelicals and white Catholics. [Pols emphasis] Both are crucial constituencies that supported Trump by wide margins in 2016 and could sink his reelection prospects if their turnout shrinks this fall.

The polls paint a bleak picture for Trump, who has counted on broadening his religious support by at least a few percentage points to compensate for weakened appeal with women and suburban populations. One GOP official said the dip in the president’s evangelical support also appeared in internal party polling, but disputed the notion that it had caused panic. Another person close to the campaign described an April survey by the Public Religion Research Institute, which showed a double-digit decline in Trump’s favorability among white evangelicals (-11), white Catholics (-12) and white mainline protestants (-18) from the previous month, as “pretty concerning.

Here in Colorado, places of worship have been open for a few weeks, so Trump won’t have to pretend to order Gov. Jared Polis to do anything new.