UPDATE #3: Governor Polis does exactly what he should be doing:

NEW: @GovofCO Polis says the state will suspend the license of C&C Cafe in Castle Rock for at least 30 days after the viral viral scene over the weekend. Polis says people were putting their “ideological or anti-science views” over public safety. #9NEWS #covid19colorado

UPDATE #2: The Tri-County Health Department is not amused by the antics of C&C Breakfast and Korean Kitchen. As The Denver Post reports:

The Tri-County Health Department on Monday ordered a Castle Rock restaurant that opened to Mother’s Day crowds Sunday to close until it complies with the statewide COVID-19 public health order limiting dining establishments to take-out and delivery services.

Tri-County said it warned C&C Coffee and Kitchen on Friday not to open for Mother’s Day, but the restaurant opened for dine-in services anyway, according to a statement from the department.

“If the restaurant refuses to follow Governor Jared Polis’ public health order, further legal action will be taken that could include revocation of the restaurant’s license,” the statement said.

The Post story does not yet include the expected gnashing-of-teeth comments from restaurant owners or Neville himself, but they are no doubt dressing up in their martyr costumes as we write this update. #MakeAmericaBrunchAgain!

Don’t tread on them, or whatever:

Tri-County Health Department orders C and C Cafe to close immediately, yet they are still open and packed with customers inside. #9News pic.twitter.com/9fWbgstRdA

You’re welcome, let us know where to send an invoice. 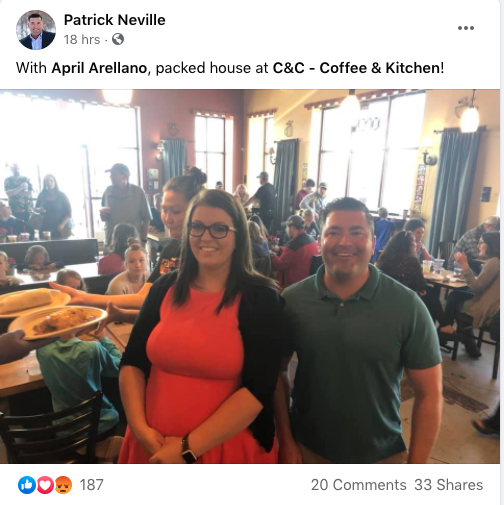 Denver7’s Ivan Rodriguez reports from (we hope) a safe distance from Castle Rock restaurant, which has emerged as the latest front line in the ill-considered campaign by a vocal fringe to throw the doors open on the economy despite a raging pandemic:

While hundreds of restaurants across Colorado continue offering take out and curbside service in accordance with the standing public health order, C&C Coffee and Kitchen in Castle Rock had other plans for Mother’s Day.

Video taken inside the coffee shop by Colorado Community Media shows booths packed, tables filled and a line snaking out the door. The owner of C&C Coffee and Kitchen declined to speak on the record with Denver7.

As the Denver Post’s Shelly Bradbury reports, Gov. Jared Polis is displeased as expected by this latest act of self-endangering defiance of both public health orders and common sense, which makes sense since every public poll shows Americans to be much more concerned about the unscientifically rapid pace of reopening than the economic pain and inconvenience of ongoing social distancing:

“These restaurants are not only breaking the law, they are endangering the lives of their staff, customers, and community,” said the statement by deputy press secretary Shelby Wieman. [Pols emphasis]

“Under Safer at Home, restaurants, food courts, cafes, coffeehouses, and other similar places of public accommodation offering food or beverage for on-premises consumption are still closed. Delivery and drive-up service is available. Coloradans can contact their local public health department if they believe someone is violating Safer at Home.”

But 9NEWS updates that the cops did more reporting than enforcement, as least yesterday:

The Castle Rock Police Department said an officer reported to the Tri-County Health Department that the cafe planned to reopen. The health department said they plan to follow up, and released the following statement:

“We are disappointed that Cookies and Crème has decided to ignore the Governor’s Safer at Home order and open up today with no attention to social distancing. This decision runs the risk of undermining the impact that other Douglas County businesses and residents have achieved over the last seven weeks by taking various social distancing measures. As the entity charged with enforcing the Governor’s statewide Safer at Home Public Health Order, we will follow up with this restaurant to ensure that they, like other restaurants in the county, take appropriate steps to protect the public health, by limiting service to curbside and take-out service.” 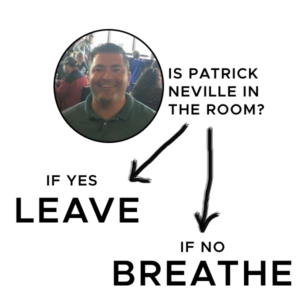 Despite the near-universal condemnation of this restaurant’s decision to reopen to dine-in service, the establishment does not appear to have been shut down by law enforcement while the crowds were present yesterday. The over-capacity throng, which included the area’s state house representative House Minority Leader Patrick Neville (see photo above), was big enough to make shutting the place down problematic for all kinds of reasons–not least the desire to avoid exposing police officers to infection.

Perhaps second only in our state to Rep. Ken Buck, Minority Leader Neville has become the point man for turning the public health response to the COVID-19 pandemic into a partisan political campaign–infamously accusing officials of developing a “Gestapo-like mentality” and openly encouraging residents to flout orders by the governor and public health authorities. This latest protest backed by Neville goes even further, encouraging disregard for the most essential best practices we should all be following even after these businesses are allowed to reopen. It’s a degree of willful irresponsibility that should shock the conscience of every Republican with a functioning brain in Colorado.

In the meantime, every Colorado legislator at least can sigh with relief that the legislative session has been pushed back another week, giving Pat Neville the opportunity to self-isolate for the recommended 14 days after doing something this stupid during a pandemic. Unfortunately we doubt he plans to do so, and hope he has not just become another preventable transmission vector. To the extent possible, if you find yourself in an enclosed space with Minority Leader Neville for the foreseeable future we suggest you make use of the nearest exit.