UPDATE #2: You really can’t argue with this:

Flynn pled guilty to lying to the FBI about his illicit Russian contacts.

His lies do not now become truths.

This dismissal does not exonerate him.

But it does incriminate Bill Barr.

In the worst politicization of the Justice Department in its history.

UPDATE: Via The New York Times:

In a possible sign of disagreement, Brandon L. Van Grack, the Justice Department lawyer who led the prosecution of Mr. Flynn, abruptly withdrew from the case on Thursday. Mr. Flynn’s lawyers have repeatedly attacked Mr. Van Grack by name in court filings, citing his “incredible malfeasance.” Prosecutors in [U.S. Attorney Timothy] Shea’s office were stunned by the decision to drop the case, according to a person who spoke to several lawyers in the office. [Pols emphasis]

Responding to the news, Mr. Trump told reporters that Mr. Flynn was “an innocent man,” and said he now views him as an “even greater warrior.” Sidney Powell, Mr. Flynn’s lawyer, did not respond to a request for comment. 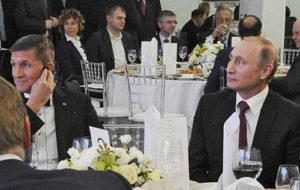 There’s some very troubling news breaking this afternoon, as The Washington Post reports:

The Justice Department moved Thursday to drop charges against former national security adviser Michael T. Flynn, who pleaded guilty to lying to the FBI about his Russian contacts during the presidential transition.

The unraveling of Flynn’s guilty plea marked a stunning reversal by the Justice Department in the case of the former three-star Army general, who was convicted in special counsel Robert S. Mueller III’s investigation of Russian interference in the 2016 U.S. presidential election.

In court documents filed Thursday, the Justice Department said “after a considered review of all the facts and circumstances of this case, including newly discovered and disclosed information … the government has concluded that [Flynn’s interview by the FBI] was untethered to, and unjustified by, the FBI’s counterintelligence investigation into Mr. Flynn” and that the interview on Jan. 24, 2017 was “conducted without any legitimate investigative basis.” [Pols emphasis]

And here’s the understatement of the year:

The retreat from prosecutors could be a political windfall for President Trump, who last month announced on Twitter that he was “strongly considering a Full Pardon” for Flynn.

It also will likely intensify concerns within and outside the Justice Department that Barr and its politically appointed leadership is intervening in sensitive cases to help the president’s friends and political allies. [Pols emphasis]

Michael Flynn served very briefly (for only 24 days, in fact) as President Trump’s first National Security Adviser before he was fired in February 2017 because of allegations — WHICH FLYNN FULLY ADMITTED — that he had been having secret conversations with then-Russian Ambassador Sergey Kislyak that involved Russian efforts to weaken U.S. sanctions implemented during President Obama’s administration. Flynn later testified that his Russian discussions had been ordered by a top Trump administration official (whose name may or may not rhyme with Fared Mushner).

President Trump and his supporters have long claimed the existence of a shadowy “Deep State” that operates with the goal of thwarting Trump at every step. Perhaps this conspiracy theory was always half right.