The major Denver newspaper published a story today that could well prove devastating to GOP hopes of recapturing the Colorado legislature this year. A significant number of Republican candidates have rather splashy and, in a number of cases, quite recent criminal backgrounds–at least some of which do appear to be race-ending. A smaller number of Democrats are also profiled in this story with their own sometimes checkered histories, but it’s quite clear that Republicans have the much more severe problem on their hands: both in the number of candidates in key races, and the severity of the crimes themselves.

We also received the large packet of documents that primarily support this story from our own sources some weeks ago, under the condition that it remain embargoed until the Denver newspaper broke the story first. But you might have noticed in the last few weeks our occasional reference to a large-scale problem with GOP legislative recruitment efforts for the state legislature, beyond the individual anecdotes we’ve discussed as they’ve come up. Well, folks, this is what we were talking about.

To be honest, we’re a little astounded that with all the money Republicans are throwing at this takeover of the state legislature (some $4 million reportedly), they couldn’t invest seven dollars in a Colorado Bureau of Investigations arrest record for these people? That’s a major breakdown in standard candidate recruitment procedure, folks. It appears that many of these candidates were not even minimally vetted.

Another thing you’ll notice right away is the prevalence of actual violent crime on the Republican side compared to the Democrats, and the dismissive response to reporter Lynn Bartels about this by Frank McNulty. That’s one part of this story that didn’t go quite the way we expected: we would consider shooting at one’s former spouse, for example, to be objectively worse than breaking into a vending machine as a college student. We assume that readers of the story–spelled “suburban women swing voters”–won’t fail to note that difference of severity and the types of crimes we’re talking about. This is very, very bad stuff for anybody who cares about the Republican brand.

A wealth of information after the jump: profiles and supporting documents on GOP and Democratic legislative candidates we were given information on a few weeks ago, and a summary of the additional research by the Denver paper–as well as a few details that Bartels missed.

Clint Webster (R), HD-24: Webster was arrested in 1987 for disturbing the peace, and in 1991 for assault. Webster pleaded guilty to felony assault and menacing. The arrest report obtained from the Jefferson County Sheriff shows that Webster was apprehended after firing two shots from a semi-automatic pistol at his ex-wife. When asked by arresting officers what his intention was when he fired, Webster stated something along the lines that he had warned his wife to stop bothering him and had even threatened to kill her, yet she ‘showed up at his home anyway.’ 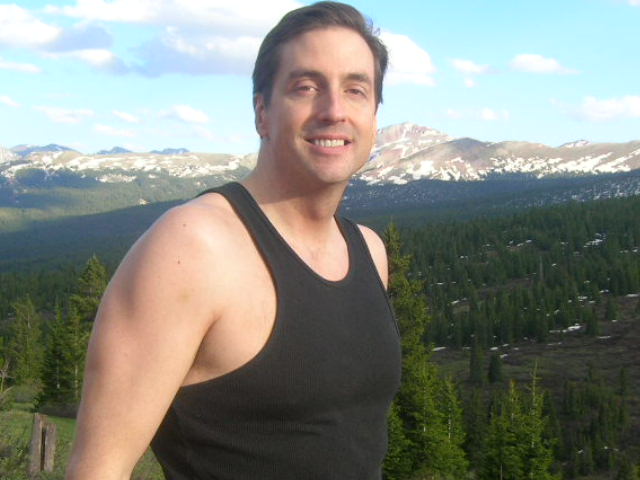 Bob Lane (R), HD-9: The Denver paper originally covered this story in March. Lane was reported to be serving probation after pleading guilty to disturbing the peace for, in his words, a “very minor incident that occurred with a lady I was dating last summer.”

Lane was initially charged with domestic violence and assault. He served one year probation–while he was a candidate.  His sentence ended nine days after he was nominated in the primary.

Steven Rodriguez (R), HD-46: Rodriguez was arrested in 1996 for 3rd degree assault and domestic violence. He pled guilty and served one year of probation. Rodriguez was also divorced in 1996, and a temporary protective restraining order was issued.

Tom Janich (R), HD-31: Janich has a truly spectacular criminal record. Known locally as a “perennial candidate,” Janich’s lengthy arrest record includes DUIs, but most interesting was his assault on two Brighton officers attempting to arrest him. The report details Janich’s tearing at uniforms, throwing officers around wildly, and alternately threatening to sue and kill them.

David Balmer (R), HD-39: Balmer’s long history of lying on his resume and sudden withdrawal under bizarre circumstances from a congressional race in North Carolina have been widely reported in Colorado media. Less reported is Balmer’s 1995 divorce from his first wife, who filed a restraining order against Balmer and alleged ‘constant’ and ‘repeated’ verbal and mental abuse, as well as alleged physical abuse. 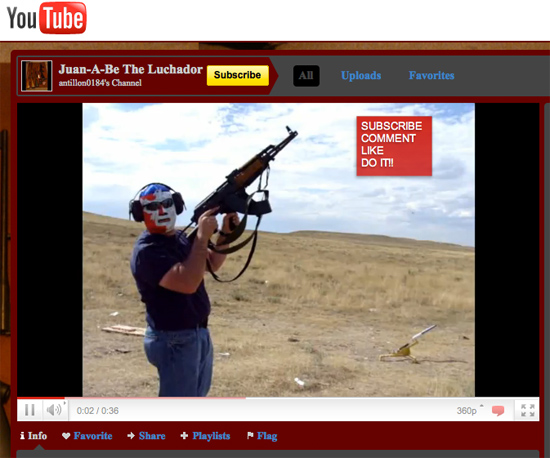 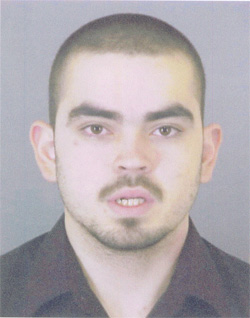 Edgar Antillon (R), HD-35: Antillon had announced early in the summer that he was withdrawing from this race, but sometime between then and now he changed his mind.

He should have stuck with his prior instincts. Antillon pled guilty to perjury after being arrested on two counts of felony impersonation in 2004. Antillon’s record includes fully 18 failure-to-appear counts on numerous mostly minor charges. Antillon told Bartels that family troubles as a youth made it difficult to appear in court, but he apparently has time to maintain a Youtube pseudonymous identity as “Juan a Be the Luchador” where he frequently poses with assault weapons (above). Antillon was personally introduced at the GOP state assembly by Frank McNulty, highlighting Antillon’s race as one they can, uh, win…

Gary Marshall (R), HD-36: As reported today by Bartels, Marshall was charged with misdemeanor child abuse in 2002, stemming from an incident where an unsupervised child was hit by a car and received minor injuries. Marshall attended parenting classes as part of his sentence. Marshall also has outstanding IRS tax liens totaling some $16,000.

J. Paul Brown (R), HD-59: Remember Paul Brown? We talked about his wacky veering in a recent legislative debate into a discussion of the United Nations, guns, and civil war.

Brown’s brothers were arrested in 2005 by federal agents for the theft of a very large amount of high explosives in New Mexico. It’s not known what they may have planned to do with these explosives, but J. Paul Brown’s strident rhetoric on the campaign trail has got to make you wonder. In addition to Brown’s remarks on the United Nations and civil war, he has called federal disaster reserves “Obama’s private army.”

Sal Pace (D), HD-46: Pace was charged with burglary while a student at Fort Lewis College in Durango in 1995. Pace told Bartels that the charge stems from breaking into a dorm vending machine, and the charges were more severe because he didn’t give names of others involved. Pace performed community service.

John Odom (R), SD-20: Odom’s ex-wife called police to his home in 2007, telling responding officers that they had an argument about child custody and John fled the scene to avoid arrest. Both then assured police that no physical violence occurred.

In 1990, Odom was forced to give up his license for failing to comply with a court order relating to non-driving alcohol convictions. In 2000, Odom was charged with a park curfew violation. On 8/23/2000, a warrant was issued for Odom failing to appear in court.

Rhonda Fields (D), HD-47: Fields was arrested in 1976 for larceny, and 1991 for shoplifting by Aurora police. Fields made her record part of her recent vacancy committee speech, and has put the story of having to steal to feed her children front-and-center in the campaign.

Robert Ramirez (R), HD-29: Ramirez was arrested for theft in Texas in 1989, for which he served probation.

BJ Nikkel (R), HD-49: After her son hit a police officer dispatched on a noise complaint to their home with a car, Nikkel threatened to sue the police department for the “emotional harm” accompanying charges against her son, which were apparently later dropped. Nikkel was also a defendant in a wrongful-death case involving an accidental shooting, where her son later pled guilty. That civil case was dismissed.

Mark “Faux-Hawk” Barrington (R), HD-26: Barrington’s campaign manager, Terry Redmond, has a long criminal record, including at least 20 arrests for crimes ranging from robbery to assault, and even two attempted escapes. Barrington himself has had numerous police calls to his home for excessive noise and vehicles.

On February 8, 2006, Joshi received a letter of admonition from the State Board of Medical Examiners for failing to properly evaluate and adequately treat a patient, as well as failing to adequately document the patient’s treatment.  In the letter, Joshi admitted he engaged conduct that “fails to meet generally accepted standards for medical practice.”

The letter demanded Joshi undergo an assessment at the Center for Personalized Education for Physicians, and the center recommended he retrain in a nephrology fellowship. On December 12, 2007, the Board of Medical Examiners suspended his medical license for failing to take remedial nephrology training. In August of 2008, he was forced to surrender his medical license.

Keith Swerdferger (R), HD-47: Swerdferger’s construction company has been the target of numerous OSHA investigations in the last ten years, resulting in 13 safety rule violations which netted over $32,000 in penalties. Swerferger’s company also has tax liens against it from California, and was a defendant in a 2004 case alleging that pension funds had been mishandled.

Thomas “Doc” Miller (R), HD-2: Arrested in 1988 for misdemeanor assault and menacing. The charge was dismissed. Arrested again in 1999 on a felony charge of being a fugitive, which was also dismissed.  The warrant appears to have come from a charge of “commercial bribery” related to the JonBenet Ramsey case, for which he was found not guilty in 2001.

Dennis Apuan (D), HD-17: Apuan was arrested in 2002 outside Petersen Air Force Base while protesting against nuclear weapons. Apuan was sentenced to 48 hours of community service.

Dale Brandt (R), HD-53: Brandt is the defendant in a civil case out of Texas, where he is accused of refusing to pay for services rendered protesting a tax  assessment.

Randy Baumgardner (R), HD-57: Two years after his divorce, Baumgardner was hit with a restraining order by his ex-wife.

Tom Massey (R), HD-60: Massey has a minor theft conviction from Texas in 1978, for which he served one year of probation.

Ken Storck (D), SD-13: Storck’s daughter was charged with underage drinking in 2000, but the case was dismissed. Notably, Storck was a deputy DA in this office.

Sara Gagliardi (D), HD-27: Attributed to a mistake by the agency overseeing nursing licenses, there is a brief appearance of a lapse in Gagliardi’s certification, which was quickly corrected–but not without triggering an attack mailer in the 2006 election claiming that she was practicing without a license.

Mike Bowman (D), SD-1: According to Bartels, the subject of a civil suit in 1996 over debts related to Bowman’s farming business.