At Least He’s Not Your Lieutenant Governor 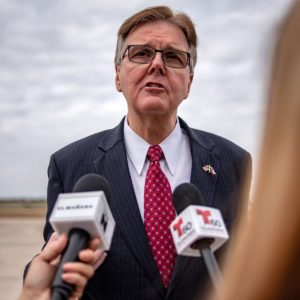 As The Hill reports, some Republican public figures are a little more…frank in their estimation of the value of the lives of Americans than others in these trying times. That, for the second time in the present emergency, includes Texas Lite Gov. Dan Patrick:

Texas Lt. Gov. Dan Patrick (R) called for the reopening of his state and the country late Monday, saying there are “more important things than living.”

“Vindicated” exactly how, you ask?

The Texas official stood by his March remarks and said the country “should not have been locked down.”

“I’m thankful that we are now beginning to open up Texas and other states because it’s long overdue,” Patrick said.

The problem, of course, is that it is the stay-at-home orders in place in every city and modestly populated state in America are the only thing that has stood between today’s brighter outlook and the worst-case scenario death tolls forecast from the COVID-19 pandemic. It appears that the stay-at-home orders have worked better than forecasts had modeled even in the best case, which has the perverse side effect of giving political opportunists a misleading basis from which to assert the stay-at-home orders were never necessary at all.

None of which is a problem either way for Texas Lt. Gov. Dan Patrick, who leads off with your life being less important than the economy! We suppose you could call that refreshingly honest, if it weren’t for the uncomfortable wrinkle of being okay with people dying.

We apologize if you were expecting a punchline. It’s unfortunately not very funny in the end.