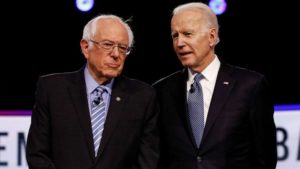 Sanders, who formally suspended his campaign last week, said he needed everyone — not just his supporters — to back Biden and make sure that President Trump becomes a one-term president.

“Today, I am asking all Americans — I’m asking every Democrat; I’m asking every independent; I’m asking a lot of Republicans — to come together in this campaign to support your candidacy, which I endorse, to make certain that we defeat somebody who I believe is the most dangerous president in the modern history of this country,” Sanders told Biden.

“I will do all that I can to see that that happens, Joe,” Sanders pledged, after calling President Trump a racist, a sexist, a xenophobe and a religious bigot who botched the nation’s initial response to the coronavirus pandemic.

After dropping out of the race for President earlier this month, it was expected that Sanders would eventually endorse former Vice President Joe Biden as the presumptive Democratic nominee. There was concern that Sanders might take his time in announcing his support for Biden — bringing up questions from 2016 about whether or not Sanders did enough to support Democratic nominee Hillary Clinton — but today’s news is an encouraging sign for Democrats.

The bigger question remains whether Sanders can get the rest of the Bernie Band to row in the same direction; Bernie’s former campaign press secretary said today that she was NOT endorsing Biden.

During a livestream today featuring both Biden and Sanders, the conversation hinted at a significant role for Bernie in the upcoming campaign. Sanders had been reluctant to attack Biden for most of the Democratic campaign because of a genuine friendship the two men had built during their time in the Senate.