On Monday, we asked you to call Sen. Cory Gardner’s Washington, D.C. office and tell him to investigate the alleged co-opting of 500 ventilators the state of Colorado tried to buy to respond to the COVID-19 pandemic by the federal government–this after President Trump himself told states to find what we needed ourselves. [1]

Today, Cory Gardner let Colorado down–again. In an interview on Fox News this morning, Sen. Gardner celebrated the news that his personal request to Trump for 100 ventilators, only 20% of what Colorado tried to buy last weekend and only 1% of what Colorado has requested from the federal government, has been granted. Gardner never even mentioned that the state’s attempted purchase of five times the number of ventilators just days ago was co-opted out from under Colorado by the same Trump administration. [2] 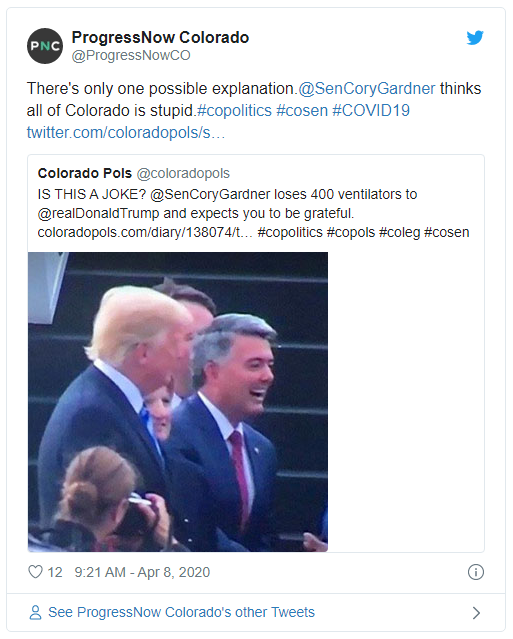 Even now, in the middle of this terrible pandemic, Cory Gardner is shamelessly placing his political career before the health and safety of Coloradans. While the Trump administration swindles Colorado out of hundreds of desperately needed ventilators, Cory Gardner wants you to believe he’s doing us a favor. It’s outrageous and appalling.

Call Sen. Gardner at (202) 224-5941 and demand he recover the other 400 ventilators Colorado ordered immediately–and then apologize for insulting the intelligence of every Colorado voter by suggesting we be thankful for a small fraction of what the federal government co-opted out from under our state just a few days ago.

And above all, never forget this sad betrayal. Especially not in November. Colorado deserves better than Cory Gardner.

Action item #1: News reports this weekend indicate that a large order of ventilators desperately needed by Colorado hospitals was co-opted by federal officials–this after President Trump told states to find medical equipment ourselves instead of relying on the federal government. [1] Sen. Cory Gardner has tried to cover for the Trump administration’s failures with his own efforts to help, but it’s not enough. Call Sen. Gardner’s office right now at (202) 224-5941 and demand he investigate the Trump administration’s co-opting of ventilators meant for our state.