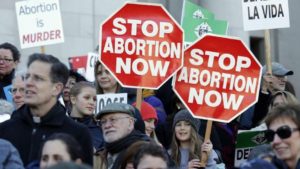 In an email sent to supporters Saturday, the organization behind a ballot initiative to ban abortion at 22 weeks in Colorado revealed that it asked the Secretary of State to grant it “additional considerations” in light of the coronavirus pandemic.

“We are still waiting to hear back from the Secretary of State’s office on whether…we can get additional considerations surrounding the growing COVID-19 concerns,” the email from Due Date Too Late reads.

The request from the Initiative 120 campaign raises the question: As the COVID-19 pandemic forces drastic changes to public life, including stringent social distancing measures like closing businesses and canceling events, what will happen with ballot initiative campaigns that rely on public signature gathering?

In order to adhere to social distancing guidelines, Secretary of State Jena Griswold announced Tuesday that the office would suspend all in-person operations, including this week’s Title Board meeting.

Griswold’s announcement didn’t, however, explain what will happen with ballot initiative campaigns like Initiative 120, which submitted petitions to the Secretary of State’s office on March 4.

Presumably, review of Initiative 120’s signatures will continue, and the Secretary of State’s office still has until April 4, 30 days after proponents submitted petitions, to determine whether enough of their signatures are valid to place the measure on the ballot. If not, the campaign has 15 days to cure signatures and gather any additional ones that are needed to meet the threshold.

But in the case of a cure period, might the Secretary of State’s office reconsider that timeline due to coronavirus concerns?

The Secretary of State’s office did not answer questions from the Colorado Times Recorder regarding how it would handle a request for more time from proponents of Initiative 120, or if signature gathering would be halted altogether.

“We are unable to talk about matters that are currently under litigation,” said spokesperson Steve Hurlbert.

In its email Saturday, Due Date Too Late expressed its intention to move beyond using volunteer petition circulators and asked supporters for financial assistance.

“Paid circulators are needed to quickly cure a possible shortage of valid signatures,” the email reads. “We are still waiting to hear back from the Secretary of State’s office on whether there is an insufficiency of valid signatures.”

It seems likely that the campaign will need a cure period to meet the signature requirement of 124,632, given that they only submitted under 15,000 extra signatures, and more are typically needed to act as a cushion for those deemed invalid.

In fact, the campaign filed a lawsuit against the Secretary of State’s office March 4, the day petitions were submitted, asking for more time to gather signatures and asserting that there’s a discrepancy between Colorado’s constitution and Colorado statute regarding the amount of time ballot initiative campaigns have to circulate petitions.

Due Date Too Late did not return an email from the Colorado Times Recorder seeking to know why the campaign waited to file the complaint until the day they turned in petitions, or how the lawsuit fits in with the campaign’s professed confidence in making the ballot with signatures they already gathered.