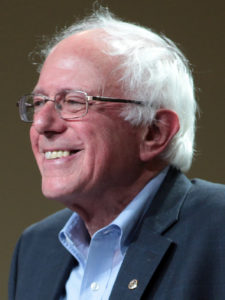 Vermont Sen. Bernie Sanders spoke briefly at a press conference today to announce that he was not withdrawing from the Democratic Presidential race…but it’s hard to conclude that Sanders is not laying the groundwork for an exit sometime soon.

Senator Bernie Sanders said on Wednesday that he was continuing his campaign for the Democratic presidential nomination despite suffering big primary losses this week, and that he planned to attend the scheduled debate on Sunday against former Vice President Joseph R. Biden Jr.

Mr. Sanders, appearing at an afternoon news conference in Burlington, Vermont, said he was not quitting the race and wanted to debate Mr. Biden, who handily defeated Mr. Sanders in four states on Tuesday.

Listing a number of the issues on his progressive agenda, he addressed Mr. Biden directly and asked “Joe, what are you going to do?” about issues like health care, income inequality, mass incarceration and the criminal justice system…

…“While our campaign has won the ideological debate, we are losing the debate over electability,’’ he said, adding that many people had told him they liked his agenda but were not convinced he could prevail in the general election. [Pols emphasis]

Sanders did not take questions from reporters following his statement, which seemed like it was designed mostly to encourage continued discussion of his top policy ideas.

Former Vice President Joe Biden prevailed over Sanders in four states on Tuesday, with the biggest blow coming in Michigan, a state that Sanders won in 2016 against Hillary Clinton.