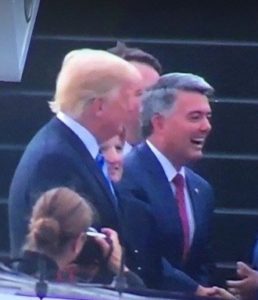 When Colorado Sen. Cory Gardner (R-Yuma) voted to acquit President Trump on impeachment charges, he barely bothered to come up with an explanation for how he made that decision. Gardner’s post-impeachment media tour was heavy on his absurd talking point that impeachment was actually a “policy question.”

Colorado media outlets were not impressed with Gardner’s obfuscation. As the editorial board of The Denver Post wrote, “Coloradans deserve better than Cory Gardner.”

As we can see from new polling data from Senate Majority PAC out today, Gardner’s excuses weren’t convincing to the majority of Colorado voters, either:

Large majorities of voters in these states say their GOP incumbent voted to acquit President Trump because they were voting with their party and trying to protect Trump politically, not because they actually believed Trump was innocent of an impeachable offense. The perception that these senators put party politics and Trump’s interests over principle is likely to affect the way voters assess their conduct on other issues.

Nowhere is this more apparent than in Colorado:

#CoverUpCory will be appearing with President Trump at a campaign event and fundraiser in Colorado Springs on Thursday.