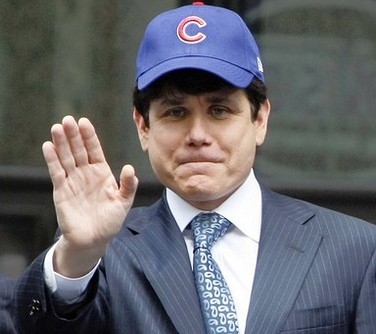 “He served eight years in jail, a long time,” Trump told reporters at Andrews Air Force Base. “I don’t know him very well. I met him a couple of times. He was on for a short while on the Apprentice some years ago. He seems like a very nice person, I don’t know him.”

Trump said “many people” thought the sentence was unfair. “He’ll be able to go back home to his family,” he added.

Blagojevich, a Democrat, has been serving his term at the low-security Federal Correctional Institute in Englewood, Colorado. He’d been a contestant on Trump’s reality TV show “The Celebrity Apprentice” in 2010.

It’s almost too perfect–just a couple of weeks out from under his own presidency-jeopardizing corruption scandal, a period which has been dominated by President Donald Trump’s score-settling against those who testified or otherwise worked against him, Trump has freed the Illinois governor accused of “selling” former President Barack Obama’s U.S. Senate seat! The best theory we’ve heard as to why this commutation was important to Trump is that Rod Blagojevich’s 14-year sentence after being found guilty of official corruption was making all similarly “transactional” politicos look bad. Graded on Blago’s curve, Trump himself could in all fairness find himself looking at his own stint in the “Club Fed” of FCI Englewood.

This was Sen. Cory Gardner’s takeaway from impeachment, wasn’t it? A little corruption never hurt anybody?