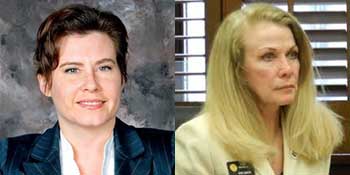 CBS4 Denver reported last night on the life and death of Senate Bill 20-084, a bill sponsored by everybody’s favorite madcap GOP duo Sen. Vicki Marble and Rep. Lori Saine, which met its fate in the Senate State Affairs committee. This was a bill that would have prohibited health care facilities in the state from requiring their employees be vaccinated against preventable transmissible diseases.

“What,” you’re probably thinking? And the answer is yes, really:

There’s a new twist in the debate over vaccinations at the Colorado State Capitol. A Senate committee heard a bill Monday that would bar employers — including health care facilities — from requiring employees to get vaccinated…

The federal Civil Rights Act requires employers to make “reasonable accommodations” for workers with religious objections. The state bill would go further and make it against the law for an employer to require anyone to get an immunization.

In the sadly persistent debate over vaccination in the United States, misinformation has created a small but highly vocal subset of the public which rejects the overwhelming scientific consensus that vaccination is not just a net positive, but an integral component of maintaining public health and preventing formerly epidemic diseases. It’s one thing to argue about whether, when, and specifically what vaccinations should be given to children. To deny health care providers the ability to ensure their own employees are not a threat to the public is outrageously bad policy.

“I see newborns every single day. I see babies in the NICU. I see people whose immune system is compromised, and that includes parents who are on chemotherapy and have compromised immune systems. And they really shouldn’t worry about coming to the doctor and contracting an illness from me.” [Pols emphasis]

If this isn’t obvious to you, the seven out of ten Americans who support mandatory vaccination of all children most likely do not want you either legislating health care policy or taking care of their kids in a medical setting. If it’s necessary to “accommodate” pseudo-scientific and religious objections to vaccination in the health care industry, accommodate them in a way that doesn’t put patients at risk.

That seems as basic to us as “first, do no harm.”