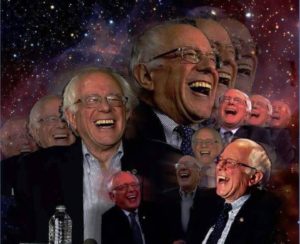 CBS4 updates on an expanding campaign and bumped-up ad spending for Sen. Bernie Sanders ahead of Colorado’s big date with Super Tuesday, after Sanders raised $25 million in January:

In addition to adding new staff in Colorado, Sanders’ campaign manager, Faiz Shakir, said they will be spending $5.5 million on television and digital ads in Colorado and seven of the other Super Tuesday states: Arkansas, Massachusetts, Minnesota, North Carolina, South Carolina, Tennessee and Utah. They will also expand ad buys the campaign already made in California and Texas, the two largest states voting on Super Tuesday.

Julian Castro, who served as Secretary of Housing and Urban Development under President Obama, will hold a canvass launch and Meet & Greet event in Manitou Springs Saturday.

Castro will meet with volunteers at the Manitou Art Center, at 513 Manitou Ave., to receive training before the campaign’s first canvassing event in the community.

And if that’s not enough presidential attention for you, actor Sam Waterston of Law and Order and more recently Grace and Frankie fame will be in Aurora and Colorado Springs stanning for Mike Bloomberg this weekend. And there’s plenty more to come: we’ve still got three weeks until the March 3rd primary ends, so Colorado voters eligible to take part can expect all the chances they desire to meet and greet the campaigns before returning their mail ballot.

As for the candidates, you’ve only got three weeks until the primary, and mail ballots in Colorado go out next week! While Coloradans can make our choice at leisure in the comfort of our own homes, or even register to vote right up until the polls close, every minute campaigns waste instead of reaching out to both Democratic and unaffiliated voters, as of the middle of next week when ballots arrive, means votes taken out of circulation. Complacency is not recommended.

It’s a novel experience getting Super Tuesday-level attention, Colorado! Let’s milk it for all it’s worth.