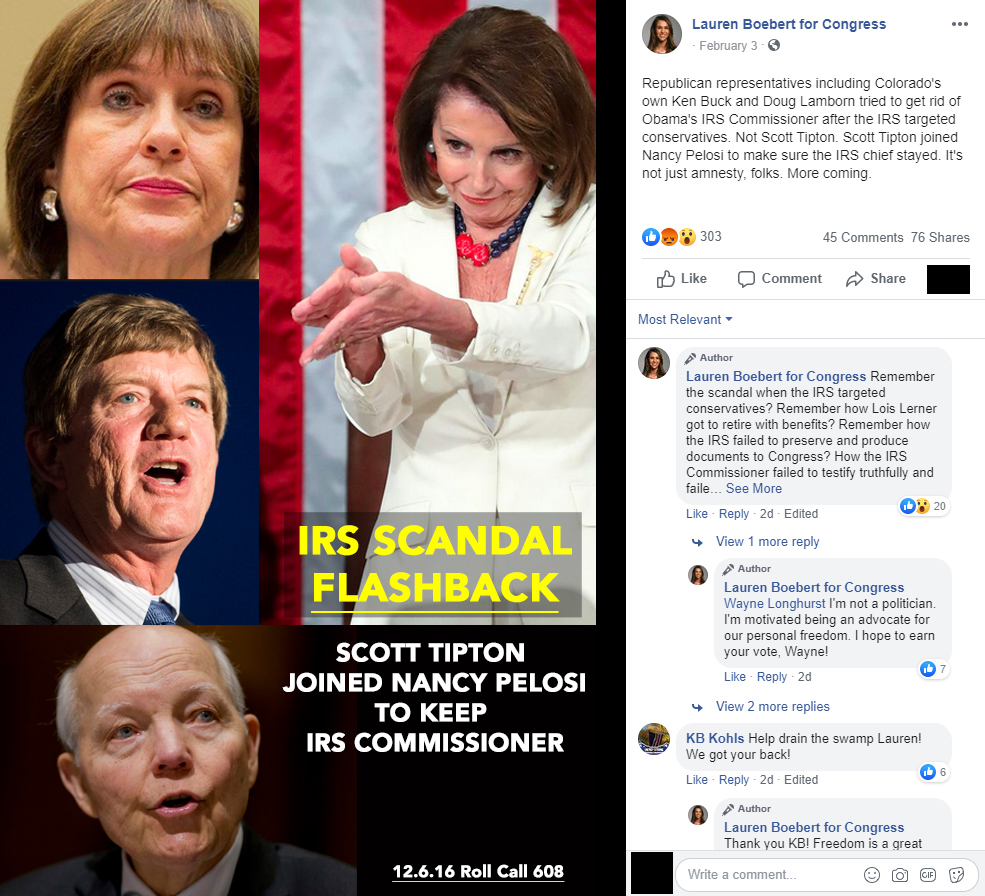 During the second term of President Barack Obama’s administration, conservatives accused the Internal Revenue Service of unfairly targeting conservative activist nonprofit groups for heightened scrutiny. Although a detailed report from the Treasury Department Inspector General in 2017 found that the IRS targeted both conservative and liberal groups based on keywords like “Tea Party” and “progressive,” it’s been an article of faith on the far right from the beginning that the whole business was a treacherous partisan attack on Republicans by the Obama White House.

This is where it gets tricky for incumbent GOP Rep. Scott Tipton, as Politico reported in December of 2016:

Lawmakers voted 342-72 to kick the resolution back to the Judiciary Committee, averting a floor vote on outright impeachment after outgoing House Freedom Caucus Chairman Jim Jordan introduced a privileged resolution on Tuesday to impeach Koskinen…

The IRS chief has been under fire by conservatives for his handling of the aftermath of the IRS’ targeting of conservative groups, which exploded into the headlines in spring of 2013. Koskinen, who was not IRS commissioner at the time, has denied allegations that he misled Congress about the controversy.

The Colorado GOP majority delegation at that time split their vote on this motion, with Reps. Ken Buck and Doug Lamborn voting with the 72 hardcores in the minority and Reps. Mike Coffman and Scott Tipton voting with the bipartisan majority. Although still a lively topic on conservative talk radio, by this time it was apparent that the IRS’ nonprofit dragnet was, if perhaps a bit overzealous, bipartisan in its overzealousness.

But folks, you know who doesn’t want to hear the unsexy truth? Republican primary voters! If Tipton wants to refute this allegation from challenger Lauren “Yosemite Samantha” Boebert, he has to convince his audience that the much-balleyhooed “Obama IRS scandal” really, you know, wasn’t so much of a scandal.

And needless to say, that’s no help in a Republican primary either.