Time’s Almost Up To Join “Operation Chaos 2020” In Colorado 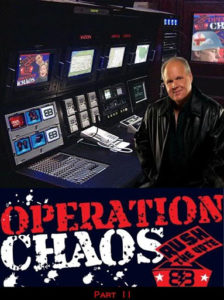 As the Denver Post’s Jon Murray reports, it’s game time in the Colorado Democratic Super Tuesday presidential primary! If you’re a bored registered Republican who wants in on the party-raiding action “for the lulz,” the deadline is fast approaching:

Colorado voters have a lot of options if they want to help nominate a major-party presidential candidate this year — but some may need to act fast to meet an upcoming deadline.

The last day to change a party affiliation — or to withdraw a party allegiance to become an unaffiliated voter — is Monday, Feb. 3. To do so, visit www.sos.state.co.us/voter.

Colorado’s change to presidential primaries from a caucus process offers more voters the chance to participate, but their options will depend on their party affiliation, or lack thereof. Registered as a Republican, but want to help choose the Democratic nominee to take on President Donald Trump? You can do that by becoming unaffiliated. [Pols emphasis]

It’s a little surprising to see the Denver Post be so frank about how Republicans can employ Colorado’s newly restored presidential primaries, enabled by the passage of Proposition 107 in 2016, in order to monkey-wrench the opposing party. But the idea is nothing new. Back in 2008, AM radio host Rush Limbaugh hyped a campaign he called “Operation Chaos” to boost Hillary Clinton’s losing primary challenge to Barack Obama.

This year, the prevalent rumor is that Republicans are mobilizing in open primary states like Colorado to support Sen. Bernie Sanders, who according to their rationale is President Donald Trump’s most desired opponent for a “showdown” between capitalism and the dreaded S-word. Sanders won Colorado’s Democratic caucuses in 2016, but our Super Tuesday primary in which Republicans can cross over if they think ahead, and more importantly the plurality of unaffiliated voters who will almost all return the Democratic primary ballots they now automatically receive, makes that past experience useless to predict future results.

In the end, we believe unaffiliated voters taking part in the Democratic primary in good faith will be the more decisive factor, not Republicans or even conservative unaffiliated voters helping Trump pick his opponent. “Operation Chaos” always sounded more fearsome on the radio than it played out in practice, mostly because the average voter just doesn’t have the time or interest in activist shenanigans.

As for the thinking behind which candidate Republicans should “chaos” for, we’ll leave that to readers.