Cory Gardner says He Cherishes America’s Public Lands. His Actions say Something Else.

(This is a user-created diary. Get started by clicking “Register” – Promoted by Colorado Pols) 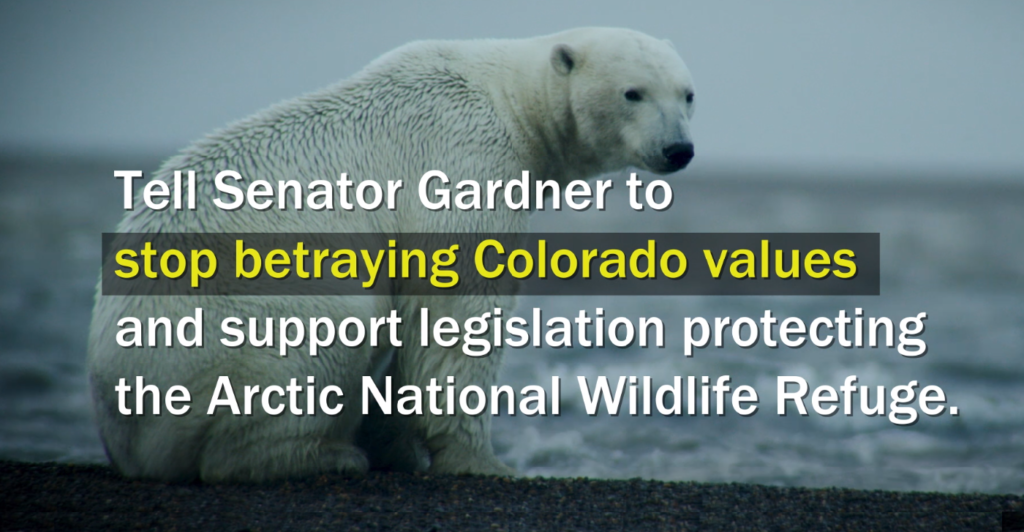 In 2017, Senator Cory Gardner of Colorado — a self-proclaimed champion of public lands — was uniquely positioned as a western Republican on the Senate Energy and Natural Resources Committee to stand up and prevent the giveaway of one of our nation’s most iconic, cherished and biologically rich landscapes to the oil and gas industry.

Not only did he fail to that, but Gardner cast one of the swing and decisive votes that led to the inclusion of Arctic National Wildlife Refuge drilling language as part of the 2017 Tax Act, ending more than 60 years of bipartisan efforts to safeguard the region. He did so despite a large majority of Colorado voters opposing drilling in the Arctic Refuge. And he did so despite more than 100 local Colorado businesses, including outdoor businesses like Osprey, MountainSmith, Alpacka Raft and Backpacker’s Pantry, imploring him to oppose the provision mandating oil and gas leasing in the Arctic Refuge.

Because of Senator Gardner’s double talk on public lands and role working with the Trump administration and its oil industry allies to allow drilling in this national treasure, Alaska Wilderness League Action has launched a campaign to send a clear message to Senator Gardner: It’s time for his actions to match his words.

Cory Gardner has Failed Colorado, the Arctic Refuge and our Public Lands

Outdoor recreation is a way of life in Colorado, a fact recognized by the outdoor recreation industry which has supported protecting the Arctic Refuge from development. The Outdoor Industry Association (OIA) is, after all, headquartered in Boulder, and the annual Outdoor Retailer trade shows recently relocated from Utah to Denver. According to OIA, the outdoor industry in Colorado generates $28 billion in consumer spending annually, contributes 229,000 jobs and $9.7 billion in wages and salaries, and creates $2 billion in local and state tax revenue. As Anna Peterson noted in 2017 in the Aspen Daily News:

“The outdoor industry is a powerful economic force in Colorado, and it’s important that Sen. Gardner listens to our voices and [that we request he] protect public lands across the country. We thank Sen. Bennet for his work on co-sponsoring legislation that would protect the Arctic Refuge’s coastal plain. Protecting our public lands is imperative to safeguarding the land, air and water that are crucial to keeping the outdoor industry viable. It’s good for business to have public lands that are protected from drilling and development, so people have places to explore and connect with the great outdoors.”

“Senator Gardner has said that ‘we must be good stewards of our natural environment’, but then he votes to open the Arctic Refuge? Actions speak louder than words and one can’t claim to be a supporter of public lands like Senator Gardner does and then vote to drill in America’s largest refuge.”

As the tax bill debate played out, however, instead of questioning the process and calling for analysis of the impacts on land and wildlife, Gardner readily accepted what we now know to be false assurances from the Trump administration in response to direct questions he posed — assurances that the administration would undertake a four to five-year process before a lease sale would take place so that all environmental laws could be dutifully followed.

But far from following laws such as the National Environmental Policy Act (still in place…for now), the Endangered Species Act (another Trump target) and the National Wildlife Refuge Administration Act, Politico and reporter Adam Federman has reported the Trump administration has repeatedly sidelined and silenced its own scientists, refused to conduct recommended new studies, and dismissed expert concerns about impacts to hundreds of thousands of calving caribou, denning polar bears, and millions of nesting and staging migratory birds.

Gardner’s failure regarding the Arctic Refuge and his silence since the 2017 vote is badly out of step with what the people of Colorado want, which is to safeguard our national treasures for future generations, not squander them for the sole purpose of helping Big Oil.

Since the tax vote, Gardner has remained silent on the Arctic Refuge…and many other things. Cardboard Cory to the rescue.

In 2014, facing the task of unseating incumbent Senator Mark Udall, Cory Gardner painted himself as a “new kind of Republican,” posing in front of wind turbines and promising to be a champion for the environment and future generations. In his acceptance speech following a closely contested election victory, he stated that “we can protect our incredible environment together.” Senator Gardner has spoken often of his commitment to public lands, referring to the vast open terrain and expanses of the west as “the heart and soul of this country” at the 2019 Western Conservation Summit.

Since his victory in 2014, however, Gardner has voted in lock step with President Trump 89 percent of the time despite polling showing that Coloradans “strongly reject Trump administration policies on conservation and public lands.” And Gardner holds just a 10 percent lifetime score from the League of Conservation Voters.

“Take the issue of climate change, which is a threat to our Colorado way of life. Rather than supporting a clean energy future, Sen. Gardner voted five times to block limits on carbon pollution, seven times to protect billions in subsidies for fossil fuel corporations, seven times to undermine scientific reviews, and ten times to make it harder to establish or enforce environmental protections.”

The Denver Post editorial board went so far as to rescind its 2014 endorsement of Gardner, writing that “Gardner has become precisely what we said in our endorsement he would not be: ‘a political time-server interested only in professional security…’ We no longer know what principles guide the senator and regret giving him our support in a close race against Mark Udall.”

And as he prepares for a 2020 reelection campaign, despite polling showing that 65 percent of Coloradans want Congress to prioritize air and water quality and wildlife on public lands, Gardner is poised to accept the full backing of the Koch network, a major proponent of fossil fuels that has played an active role in opposing climate change legislation. In fact, throughout his career on Capitol Hill, Gardner has raked in more than $1.5 million in campaign contributions from the oil and gas industry.

Time for Gardner to Change Course

More than two-thirds of Coloradans are against opening the Arctic Refuge to oil drilling, businesses and the outdoor industry oppose it, and Colorado-based and national conservation organizations including Rocky Mountain Values, Sierra Club Colorado, Wilderness Society Action Fund and League of Conservation Voters are urging Senator Gardner to support protections for the Arctic Refuge. In light of the reckless manner by which the Trump administration is rushing its leasing process, and because allowing oil companies to drill in the Arctic Refuge sets a dangerous precedent for Colorado’s protected landscapes, threatens the environment, indigenous rights and our climate, Alaska Wilderness Action implores Senator Gardner to change his position.

If Senator Gardner believes, as he said in a CBS interview last year, that “public lands are a very important part of who we are in Colorado” and “part of our way of life,” then he will support legislation authored by Senator Michael Bennet that would fully protect the Arctic Refuge and its biologically-rich coastal plain for future generations.